This is one way to celebrate a 5-year cancerversary

On January 25, 2011 I received the diagnosis of Invasive Ductal Carcinoma.  Here is a link to my first ever breast cancer blog post.  A lot has happened since 2011.  I had four surgeries and chemo.  Went into remission for two years before being diagnosed with an axillary recurrence.  I then underwent surgery two more times, more chemo, and radiation.  I have also ridden my bike for hundreds and hundreds of hours and over 10,000 miles!

On January 25, 2016, exactly 5-years from my first diagnosis, Shannon and I will be in Chile lining up for the TransAndes Challenge, a six-day mountain bike stage race.

There are lots of words I can use to describe my emotions about this, but mostly I am just feeling focused and determined to be prepared as best I can for a 6-day stage race in January while living in Park City, Utah with temperatures hovering sub-10 degrees right now!  That and a whole lot of excitement!

At TransAndes, Shannon and I will be racing as a co-ed duo team similar to how we raced at TransAlp in 2007 and TransRockies in 2008.  Although Shannon is much faster on the bike than I, we must stay within 2 minutes of each other throughout throughout the race.  Shannon's job is to help me go as fast as I can.  He will carry the majority of our equipment to keep my load light.  He will stop at feed zones and replenish water and food for both of us while I blow through; then he will chase me down and pass me food.  My job is to keep moving as fast as I can!  Our goal is to race hard, soak in the experience, and have fun!

I can honestly say that this race has intrigued me since I first heard about it years ago.  The inaugural TransAndes race was in 2009 and in 2012 they had a booth set up at Interbike (a trade show).   Shannon and I joked about doing it; maybe in 2014..... When my recurrence happened in 2013 I had serious doubts my body would ever recover enough to race a 6-day stage race.   Last year, as I gained confidence in my body, I started to watch airfare prices to Chile via daily email notifications.  Last June, prices dropped by a few hundred dollars and with the click of a button our joking about racing TransAndes became a reality.  It really was that easy!

Now for the harder part; preparing for a January stage race in the midst of a harsh Park City winter.  We are fortunate that St. George is a short 4 hour drive South and we've been able to do training camps over Thanksgiving and Christmas breaks. We have also had to put in our fair share of cold winter rides up North.  I am a cold WIMP!!!  I pretty much run cold all day long, but have figured out ways to make riding in sub 20 degrees pleasant.....well at least tolerable.  I will do a whole post on winter riding gear/tricks, but in the meantime, here are a few photos.....

The countdown begin.  We leave in just over 3 weeks! 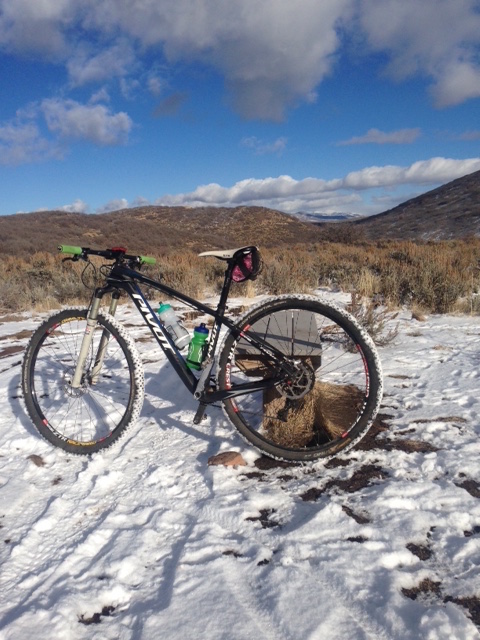 Snowbikes packed down the snow enough that I was able to ride my standard 29er hardtail on trails! 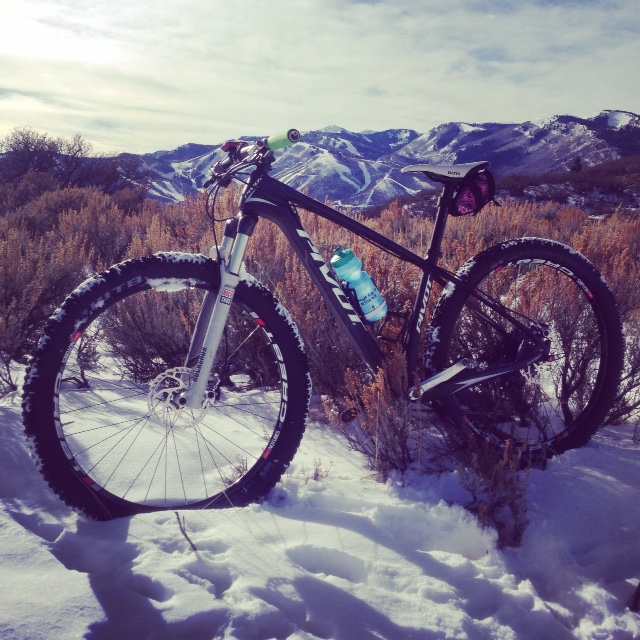 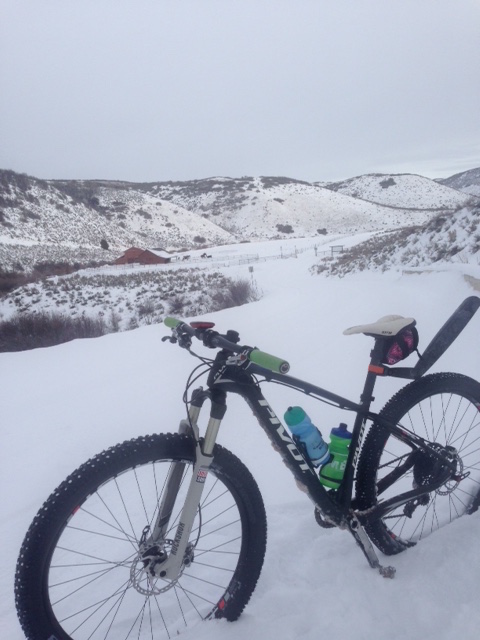 With consecutive days of 2 feet+ of snowfall,
dirt roads are now completely snow covered in Park City.
On this particular day the snow on this road was a bit deep for my set-up. 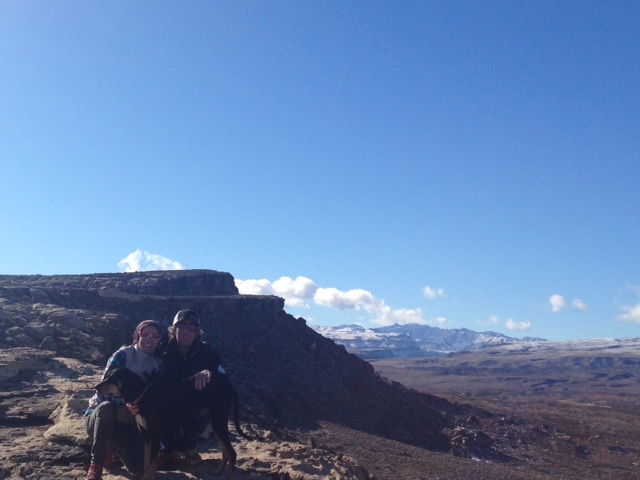 We traved to St. George, Utah for the Holidays and one final training camp before leaving for Chile 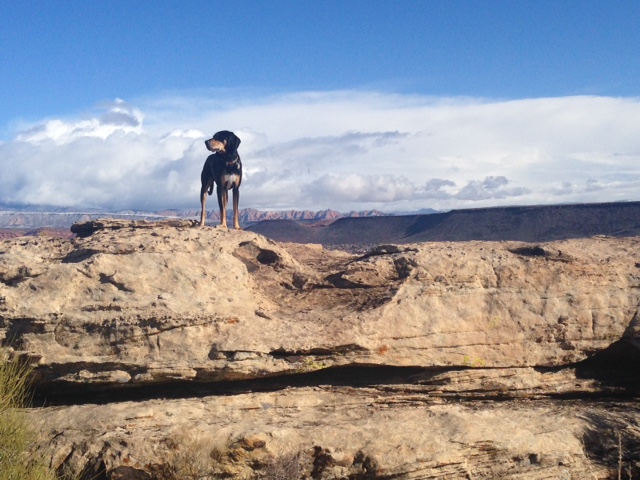 Dizzy always travels with us!  The hardest part about going to Chile will be leaving him.
Fortunately one of his non-fur (human)  buddies will be staying at the house and taking care of him. 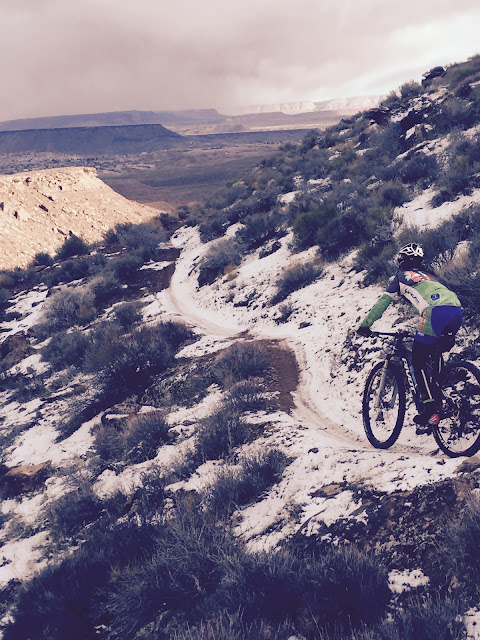 Although temperatures are about 30 degrees warmer down South,
we were still able to find some snow 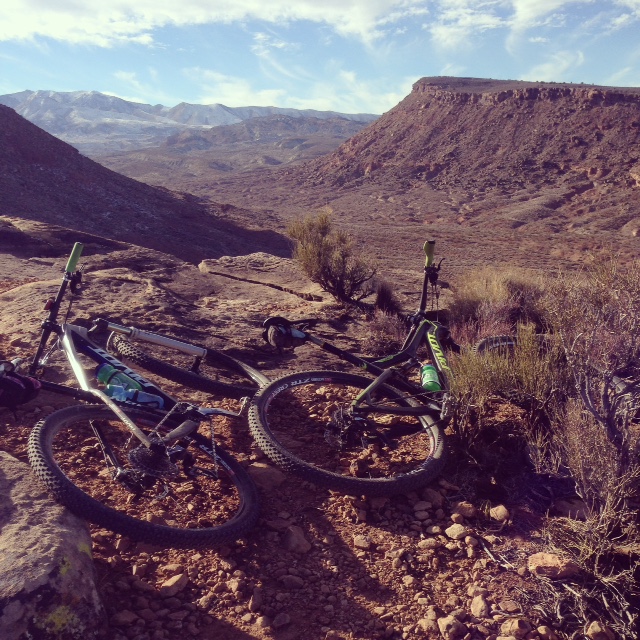