Skillz and Drillz with Gene Hamilton

Back in the fall of 2010, when having a blog titled Athlete Fights Cancer seemed unfathomable, I had the opportunity to participate in one of Gene Hamilton's BetterRide clinics in Fruita, Colorado.  Gene has worked with and helped some of the best (and by best-I mean world champs) mountain bikers and has developed this amazing curriculum that teaches correct body positioning, foundational skills, and drills that just plain make you fast and efficient on the bike.  I wrote about it here.

Most cyclists think the only way to get faster is to get fitter, and while getting fitter really, really helps, improving bike skills and efficiency not only allows you to downhill faster, but helps you conserve energy so you can focus on utilizing that hard-earned fitness to the best of your ability and hammer up the climbs.  Knowing that my downhills skills had room for improvement, and being an easy 'buy-in' to Gene's philosophy based on my history of having constant coaching in my former life as an equestrian, I thought the BetterRide clinic would be especially worthwhile.  It did not disappoint, and I must admit when my life took an unexpected turn in 2011, practicing drills and using some of Gene's visualization techniques brought me immense enjoyment during a difficult time.

Fast forward to 2012.  I am back to racing!!!  Racing is going well and I am feeling fit and fast and although I feel like I'm riding technically stronger and more efficient than in the past, I also feel like a little technical tune-up is in order.  So, I caught up with Gene Hamilton for a few hours when he was traveling through Utah.

Here are some photos Gene took: 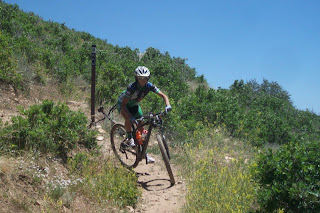 Practicing some tight switchbacks.
I now have my vision, position, and braking dialed.  Well...hopefully! 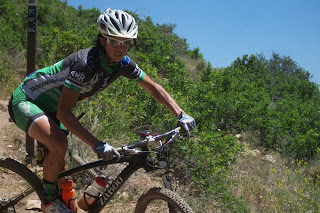 As for specifics, I'm not going to give away my new secret weapons:)  Okay, maybe I'll give away a few in my lesson write-up on MTBracenews.com!

This Sunday, June 17th, officially marks one-year since my last chemotherapy treatment.  (Note: I wish I could say that it marks one-year since finishing cancer treatment, but technically I'm not done with treatment.  I still take a daily Tamoxifen and will officially be done with cancer treatment mid-July 2016).  A lot has happened in this year.  Life is different, but very much the same.

I'm pretty content with my life, and unlike many people who are diagnosed with cancer, I don't feel the need for a drastic change.  Why would I?  I adore my husband.  We have the raddest dog and cat,  a home that feels like home, a cycling community that feels like family, and arguably some of the best singletrack imaginable.  I enjoy my job and I love to ride/race my bike.  Cancer has forced us to change some plans, but I suppose plans are meant to be changed, and we will adapt and are happily moving forward.

As for one-year updates, I am very pleased to say that I have hair.  Being bald is very simple and I'm all for simplicity, but looking like a sick (bald) cancer patient just wasn't for me.  So yeah for hair!
Anyhow, here's what my hair looks like (sans helmet and/or visor) one-year after finishing chemo and five haircuts later. 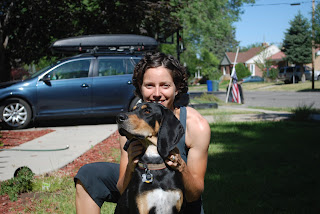 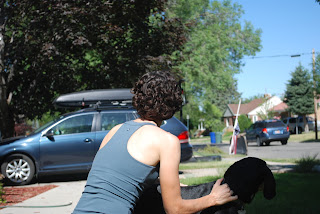 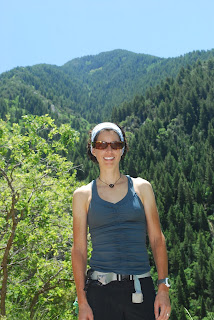 Yes, the curls are new and the color is darker.  The plan:  grow it out to pony tail length and hope the curls stay!

In honor of our one-year anniversary of health, Shannon threw a surprise party at Trailside Park in Park City.  Despite the wind and cold temps, it was fun celebrating with friends.   Apparently Shannon was pretty stressed about keeping it a surprise, but he was even more concerned with how to get me to the park without raising suspicion.  He always says that I never do what he says (usually I do the opposite) so he was in a bit of a predicament.  Being the creative dude he is, though, he had my coach put a skills ride at Trailside on my training plan.  Since I always follow my training plan, it ended up being pretty easy to get me to there.  We'll be laughing about this for a while:)

As for what I've been up to since my last post.  Well, I returned from Mesa Verde, rested for a few days, and then spent the next three weeks ramping up the training and racing five times.  Nothing like making up for lost time!  Needless to say, by my last race I was pretty spent and it showed in my performance. 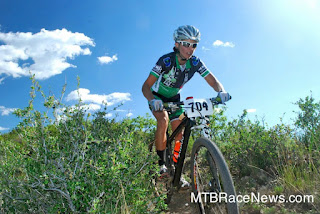 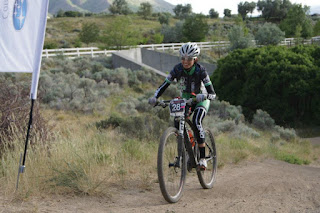 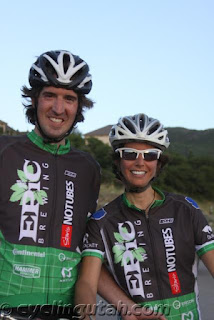 I also finished up my last four weeks of work and am now officially on summer break! Since Shannon and I both need some rest, we took a staycation this week.  This entails sleeping in every day, going on  some chill mountain bike rides, and taking Dizz on some hikes! 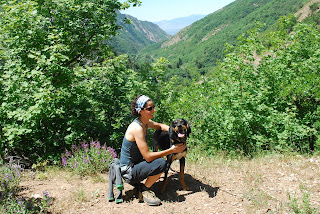 It's pretty easy to have a staycation really feel like a vacation when you live in mountain biking paradise!

Up next is a boatload of mountain bike racing as I ease myself into some longer distance events.  Oh, and it is that time of year for more 6-month check-ups.  I'll keep you posted!
Posted by Jen Hanks at 6/14/2012 9 comments: