This post begins with a giant hell yeah!  All of my 6-month tests came back negative!  So my status remains the same.  No evidence of disease.

I wish I could say that I remained cool, calm, and collected during these past few weeks of tests, but that would be a big fat lie.

It started off with an MRI two weeks ago.  I was pretty anxious about this procedure because I remember it from last year as being a totally claustrophobic experience, face down, in an uncomfortable contraption for 45 minutes.  This time, they slid me into the MRI machine feet first, I listened to chill music, and that made all the difference.   It was a totally peaceful experience until I was done and told that the results would be read shortly.  Suddenly, I was a basket case and needed to know the results stat!  A few hours of complete inability to focus later I had the report read to me word for word and I was relieved for the no evidence of anything suspicious results.  I did take this with a grain of salt, though, as my initial MRI from last year, when I had a known cancer, was a false negative.

Next up was the Sonocine, or automated whole breast ultrasound.  This is the only diagnostic imaging tool that clearly detected my known cancer last year.  Nope, the routinely used Mammogram and ultra-expensive MRI were not very useful.  Of course it has to be the test that insurance does not (yet) pay for.  I traveled up to McKay Dee Hospital, the only facility that has a Sonocine, and gladly paid out of pocket for the test.  The procedure was short and sweet and I was told that my radiologist would read the results later in the week and if anything suspicious was found I would get a call back.  I really didn't think about the test for the rest of the week or weekend, which is pretty atypical for me.  Perhaps it was because I was more focused on a big training and busy work week?  Perhaps it was the totally blissful weekend of endless riding in St. George? (more on that later)  Regardless, when I hadn't heard anything by the following Tuesday, I called over to McKay Dee to get the results.  When they wouldn't give me the results, I started to have a mild freak out.  The last time someone balked at giving me results over the phone was my pathology results at initial diagnosis.  Did this mean something was found?  Anyhow, I was told that my results were faxed to Huntsman and to contact my referring physician.  After not much luck, I finally resorted to emailing a super duper awesome NP at Huntsman who I swear lives with her iPhone on.  She pretty much immediately found the report and called me back with the good news.  I think I said AWESOME like ten times to her!

So, not exactly cool, calm, and collected.  Oh well.

Two other significant events happened over the past few weeks.  First, I celebrated my one-year anniversary from diagnosis.  Some people call this their cancerversary.  Since it is only my first one, I silently acknowledged the day and went about my business.

Shannon and I also traveled down to St. George for Camp Lynda, an annual weekend of mountain biking in southern Utah.  I spent the weekend under bluebird skies, in what felt like 70 degree temperatures, ripping trail and talking healthy food with an amazing group of women (and some men too) including the camp host herself!  It was the end of an amazing week of training that was definitely my biggest block of riding in over a year.  The best news.  I feel good! 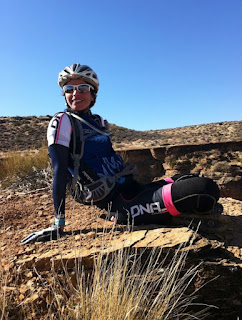 Lunch break.
Favorite lunch snacks from Camp Lynda include a red potato (or yam) stuffed with pumpkin and hemp seeds as well as oatmeal and fruit mashed in a baggie.  I'm really trying to eat whole foods on my bike rides.  I ride enough that the majority of my diet could come just from energy foods consumed while riding.  Not exactly nutritionally dense. 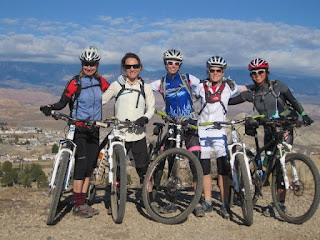 An amazing and super fun group of women

Even took time to practice some techy sections.
The extra push and spotting on the big rocks was a great bonus!
Looking forward, it is hard to believe that my first race is only three weeks away.  I have (what I think is) a pretty incredible race schedule put together.  It keeps getting more and more ambitious.  My mantra for 2012 is:
1-No excuses.  How can I reach my full potential if I make excuses for myself.
2-Be forgiving and kind to myself.  Like most athletes, I tend to be hard on myself when I have a bad day.  It is okay to have a bad day, but no need to make excuses for it!
3-Have fun!  Every single day.  But if I do the above two things, fun will just happen.
Posted by Jen Hanks at 2/07/2012 4 comments: