What do closing the door, shutting you out, high/low line, low/high line, pumping, and manual all have in common?  BMX of course!

Last weekend was all about BMX.  I raced Rad Canyon Indoor BMX Friday, Saturday, and Sunday.  The folks over at Rad Canyon put on a stellar series.  I have heard that their outdoor series is the largest in the country!

Why the attraction to BMX?  I'm not sure.  A few years ago I thought about trying it, but my plate was full and it never really fit in my schedule.  So, since I'm currently not officially training - yet- it is perfect timing to try something different.  I also like that I can go race BMX and have no expectations and therefore no disappointments.  Just pure joy of being silly on my (er....a borrowed) BMX bike.  That is a good thing in my life right now.

I've only ridden a BMX bike four times-the same number of times I've raced- but I've quickly learned that there are other reasons to love BMX.  Here are my top 5 reasons: 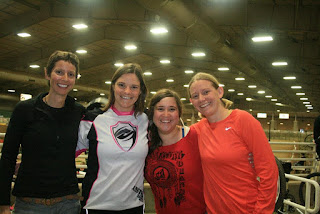 Me & the Park City dirt jumpers.  We were all BMX newbies.
(Photo Aaron Kruger) 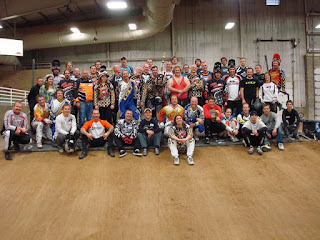 Old people do BMX.  Photo from old guy (&girl) clinic.
(I'm bottom right, Shannon is back row ~4 from right)
As for how the racing went....since I had no expectations, AWESOME!  I am most proud of the fact that my starts are improving every singe race.  I went from 2-weeks ago being waaaay off the back at the starts, to last Sunday being 2nd (behind that dang 12-year old) until the first big jump where I proceeded to get passed by 3 girls and then shut out in the first corner where I can go fast.  So according to that 5-year old girl, since I can pedal hard, I just need to learn how to pump hard and I will be fast at BMX.  Simple enough!
Posted by Jen Hanks at 11/23/2011 2 comments:

In general I feel good; better than I thought I would feel at this point in my recovery.  There is a sense of normalcy back in my life as I have started preparing my body, with a bit more focus, to 'officially' start training for the 2012 race season in January.  My atrophied upper extremity muscles (due to surgery) are getting stronger every week.  I would estimate that at this point I have regained approximately 75% of my upper extremity strength.  Every day on the bike is a great day.

As much as I want to move on and look optimistically to the future, I have reminders each and every day of what I've been through and what still lies ahead.

There are physical reminders.  I now have five new scars to add to my collection of scars scattered over my body.  Obviously there is the mastectomy scar, there is also the sentinel node biopsy scar, breast biopsy scar, axillary biopsy scar, and two scars where the drains were post-mastectomy.  I have always been fond of the scars on my body, they tell the story of my life, but for some reason these scars are just....different.  I could do without these five new scars.

I am also adjusting to my new body (i.e. breasts).  I really, really liked my former body.  I liked the way it looked and the way it felt.  I will admit that it is possible I have put my former body on a bit of a pedestal and 'think' I liked it more than I really did.  Regardless, my body is different, and I am working on getting used to it. Fortunately each day my new body is feeling more and more like mine.  I spend a lot less time examining and scrutinizing it in the mirror.  My new breasts are feeling so much like my own that I no longer fear crashing my bike and damaging them.

Daily medication and side effects also make it difficult to put this year completely behind me.  Each morning I pop a Tamoxifen pill.  Tamoxifen is a very powerful anti-cancer medication for estrogen receptor positive breast cancer.  This little white pill reduces my risk of local recurrence (yes, cancer can recur in my mastectomy scar or axillary region) and distant recurrence  (metastasis to other organs/bones) as well as developing a new cancer in my other breast by about 50%.  Pretty significant in my eyes.   It is not without side effects, though.  The most frustrating being hot flashes.  Yes, between the chemo and the Tamoxifen, my hormones are completely out of whack; possibly permanently.  I often get hot flashes at night that wake me up in a hot sweat.  Then I get cold because I am sweaty.  This makes me cranky because not only is it a reminder that cancer treatment has put my 35 year-old body into essentially menopause, but I don't like being awoken in the middle of the night!  The 50% reduction makes it worth it though.

Then there is the fatigue.  I realize that I am fortunate that I have been able to exercise consistently through and after treatment, but there does seem to be some mild fatigue.  It is very subtle and sometimes I am not even sure if it is real, but I do know that after a long day at work my brain is tired and I need a short nap before I can even consider doing my workout.  I have a lot of second guessing in how hard to push myself and how long to recover from hard workouts.....and even when I should start racing seriously again......will it take my body a month to recover from a 100miler?  will I ever be able to recover fast enough to do a stage race again?  will I be competitive?

Finally, there are the doctor's appointments.  Granted, it is wonderful to not have weekly appointments, but routine oncology visits will never go away, ever.  That is because with (invasive) breast cancer you never know if you are cured.  That is, and I'll put it bluntly, until you die of something else.  It can come back in 6 months or 20 years.  Honestly, I don't know where these billboard statistics of 99% cure rate if caught early come from.  My guess, Stage 0 (non-invasive) cancer.  Anyhow, I digress....  Since risk of recurrence (both local and distant) IS greatest in the first 5 years, I am to see my medical oncologist and surgical oncologist every 6 months.  I also alternate mammogram, MRI, and sonocine every 6 months.  My plastic surgeon would also like to see me annually.  Each appointment and test will likely bring some fear in what may be found.  I believe this gives a whole new meaning to 'test anxiety'.

I've recently been looking at photos of me from last year this time.   Even though it was only one year ago, I see a sense of innocence in me in those photos.  I had cancer at that time, but I didn't know it.  To have so few worries, such freedom, I miss that.....

So I have a few more things to think about than I did before I was diagnosed with cancer last January.  Who knows, maybe someday I won't think about these things but in the meantime life is different.  I am different.

In 2008 racing TransRockies was the hardest thing I had ever done.  Many of the days were cold and wet.  I had been battling a foot injury all summer and developed a knee injury on day 2 (of 7) of the race.  When I returned, everything seemed easier.  I thought, if I can finish this race, I can do anything.  In comparison to what I have done this year, TransRockies was cake.  Who knows what I can do now.
Posted by Jen Hanks at 11/13/2011 9 comments:

Overall, this week was just rad.

It started with my birthday Monday.  Yep, I'm a Halloween baby.  It was a beautiful fall day and I spent most of it in the mountains.  A great start to my 36th year....

Tuesday I found out that I was selected by Cycling Utah as Female Rider of the Year.  To put this in perspective, the Utah Rider of the Year title has been awarded to Tour de France stage winners in the past.  I am completely speechless about this honor.  Okay, I will say this...  The love and support I have received from the Utah cycling community has helped me beyond words get through this difficult year.  Thank you.  I hope that I can live up to this honor.  I plan to work hard, doing what I love, and return to racing as strong as ever.  Maybe reading my story will help newly diagnosed women to be a little less scared about cancer treatment.  This higher purpose is definitely aiding in fueling my fire now.

Thursday and Friday I started working on my 2012 race schedule.  Somehow, it keeps getting more and more ambitious.  It is certainly not solidified yet, and some of it will depend on how my body responds and recovers from actual training and racing, but so far, in my opinion, it is a perfect mix of my favorite classics and new and exciting events.  I am really, really, REALLY excited.

Today, to conclude an already incredible week, Shannon and I raced BMX at RAD Canyon.  This was my first time on a BMX bike,  I had a loaner, and it did not disappoint.  We participated in a clinic in the morning where I (along with about thirty 10 year olds:) learned some basic BMX techniques such as taking the high/low line and how to survive the starting gate.  I never did master the track-stand (something to work on) in the starting gate and my starts paid dearly, however I had a great time drilling it for the 45 second effort.  I also need to work on my post-race high five and fist bump coordination with my fellow competitors.  I quickly learned that BMX racing is different from mountain bike racing as blocking and cutting racers off is acceptable and even encouraged.  We had so much fun; I will definitely go back.  First I need to sharpen my elbows though:)
Posted by Jen Hanks at 11/05/2011 5 comments: