Last weekend Shannon and I traveled to Cortez, Colorado for the 12 Hours of Mesa Verde held on the world famous Phil's World trails.  We raced in the co-ed duo category which is basically a 2-person relay race; Shannon races a lap, passes the baton (or clothespin in this case) to me, and I race a lap, and so on for 12-hours.  The team that races the most laps with the fastest time over 12 hours wins.  Although we were gunning for the win, in the end, we came up two minutes short.

In my opinion, though, the weekend was a success.

For me and Shannon, just getting to Mesa Verde was a victory.    This race is incredibly popular and  registration sells out quickly in December.  In 2010, Shannon and I had pre-registered, but we both succumbed to a vicious case of food poisoning the week before the race.  We tried again for 2011, but my cancer treatment interfered with our racing plans.  This year, once again, we added it to our race schedule way back in December and were both determined to not only get to the race, but to race well.

Here's how it went down from my perspective:

Friday we arrived to the venue for an easy pre-ride of the course.  We rode really, really easy.  So easy, in fact, that I tipped over on a ledgy section and have some fun, new bruises as proof.  The course seemed less technical and bumpy than I remembered, but I would regret thinking that by my fourth race lap on the course.  I had two busy and stressful days leading into the race, but race morning I woke up feeling rested, ready, and psyched to race.

We didn't know who our competition was, but I had seen on facebook (the source of all important information) that Jonathan Davis and Eszter Horyani were teaming up so we knew there would be some formidable competition.  Additionally, there were over 400 teams and some 1700 racers all jammed onto a 16-mile singletrack course, so passing became an added element to the race.

Shannon raced the first lap and he turned in a respectable 1:17 although I counted 5 girls go out in front of me, Eszter included, so I knew I had some work to do. 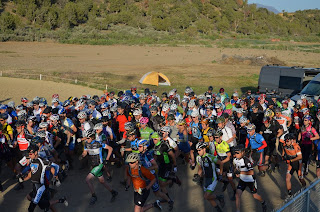 I went out hard and within a few minutes I could see two girls in front of me.  I got around Eszter first and was following another girl when she blew a corner and came to a complete stop.  It was easy to do, as the dry spring made the course especially loose and dusty.  I was able to get around her and proceeded down the trail.  A few moments later, she was on my wheel asking if she could get around.  I thought about letting her, but the new, tougher racer in me reconsidered.  I had just caught her and passed her.  I was pretty sure I was riding faster, so I think I mumbled something, accelerated, and proceeded to drop her.  Even though I had pre-ridden the course, a few turns and rocks caught me off guard.  Additionally, I had to contend with a bunch of fast duo-male teams catching and passing this first lap.  Slowing to allow guys to pass this first lap gave me extra sympathy for the solo riders who must have been passed a hundred times by team racers each lap.  I finished my first lap passing four girls.  The one girl I did not catch ended up being in a different team category. 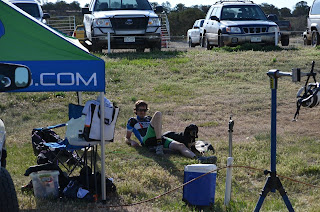 Shannon chillin' with Dizzy between laps

My decent but not astoundingly impressive first lap put us in the lead and gave Shannon a little less than a 2-minute buffer on Jonathan and from here on out our race was pretty exciting.  Shannon came in after his second lap right ahead of Jonathan so Eszter and I were jumping on our bikes and taking off for our second lap together.  I knew I wanted to hit the singletrack first so I attacked right away and was able to gap Eszter pretty early in the lap.  I ended up coming in with about the same gap as after my first lap and Shannon was off with Jonathan not far behind.  This time, though, Jonathan would come in before Shannon.  While everyone else was showing some fatigue and lap times were slowing, Jonathan kept putting down consistent 1:17 laps.  Who does that??? 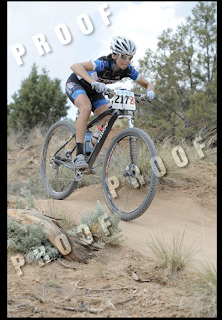 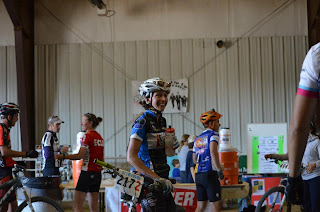 Smiling after one of my laps

So for lap 3 I was chasing once again.  Just as I was starting to think that I wouldn't catch Eszter this time around, I saw her up ahead on the final climb of the lap.  I attacked as hard as I could and passed her as we were cresting the climb.  It was a pretty narrow spot and she could have easily stuck an elbow out or swerved in front of me to block me, but she did not.  I rode the last downhill smooth, safe, and efficiently and then time trialed the final flat section to the timing tent.  As I handed Shannon the baton (er, clothespin) I told him he only had seconds and to ride fast and smart.  I know Shannon raced his very hardest, but that dang Jonathan put down another 1:17 and gave Eszter a 5-minute head-start going into what would be our final lap. 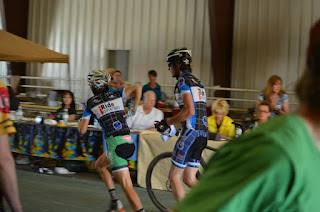 Sprinting to my bike for my 4th and final lap

I knew a five-minute gap would be difficult to close, but I enjoyed the chase and never gave up as I desperately passed what felt like a zillion solo racers who at this point had been riding in circles around Phil's World for eleven some hours and were probably pretty sick of being passed.  Thank you everyone for appeasing my desperate pleas and allowing me to pass!  In the end, I came up two minutes short. 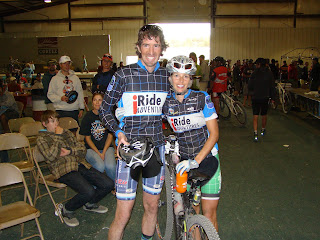 The first time we saw each other all day (besides transitions) 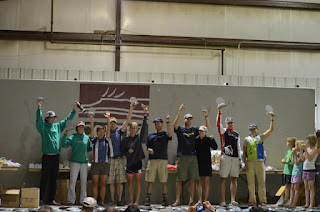 Even though we didn't 'win', the weekend was pretty incredible.  The battle between me and Shannon & Eszter and Jonathan was well fought and made for the most fun and definitely exciting team race I have ever done.  I'll take an epic battle with a second place finish over a boring win any day.  It was also a weekend full of friends.  We had a group of about fifty Salt Lake City racers who traveled down to Cortez to race; some raced solo, some duo, and some mostly hung out and drank beer between the occasional lap.  The mutual support was incredible.  But, when I reflect, what was the most meaningful about the weekend was the contrast from last year.  This same weekend last year, I underwent my 2nd chemotherapy treatment, my hair was falling out in chunks so we shaved it, and I could only day dream about racing my bike.  This year, I was duking it out with some pretty amazing racers (and people for that matter) for the top step of the podium.  My journey back to racing has not been easy.   It has taken self-reflection, dedication to a new lifestyle, belief in myself, lots of support from my awesome hubbie, and a whole lot of hard work.  Definitely worthy of a future blog post.
Posted by Jen Hanks at 5/15/2012 4 comments:

Yep.  Race season is underway and it is awesome!  When I was first building my race schedule earlier this year, I had every intention to ease into racing.  I planned to not do my first 50 miler until July and to not race any distance greater than 50 miles this year.   Arbitrary, I know, but something to guide my return to racing nonetheless.  I have followed this to a certain degree, however I keep bumping up those  deadlines.  For example, I am now planning on racing my first 50 miler in June (not July) and have already registered for a 100k.  I guess at this point, it is safe to say, that I'm not ruling anything out.  So much for arbitrary timelines.  I'm psyched!

Speaking of racing, last weekend was the first Utah State Championship Series race and was held in Alpine, Utah at Lambert Park.  Last year, I experienced this race as a reluctant volunteer.   Reluctant, not because I didn't want to support the super awesome promotors of this series, but because I really wanted to be racing.  I watched all the local pro girls riding well and duking it out, and I wanted to be part of it.  This year, I was a racer!  It is waaay more fun to be a racer!  (Okay, enough exclamation points, I think it is clear that I am excited about racing)!!!!!

Like I already mentioned, The Lambert Park race is part of the Utah State Championship Series.  The promotors of this second year series seem to know a thing or two about putting together quality events, and perhaps that is why this particular race tripled in participant numbers since last year.  These guys design fun courses with ample passing and real singletrack.  Race registration is efficient.  Race results are posted quickly and awards are done in a timely manner.  And there is actually a decent pro payout.  Needless to say, I'm planning on being a RACER for the entire 4-race series.

As for the race, it went pretty well.  I finished 3rd behind Erica Tingey and Kathy Sherwin once again.  Overall, I felt good, and am proud of how I raced, but still have some areas to improve upon.  The one thing I notice as I do more races (and I have now done four- so hopefully this isn't premature to report) is that the pain associated with racing is a thing of the past.  Sure, going as hard as you can hurts, but now it hurts in such a good way.   Racing my mountain bike makes me feel healthy and strong and ALIVE.  Complete contrast to how I felt at this time last year.

I'll leave the detailed race reporting to the professionals, since I lack the motivation to talk about myself anymore.  Check out MTBRacenews.com for a race report, more photos, and results.

Some photos from the weekend: 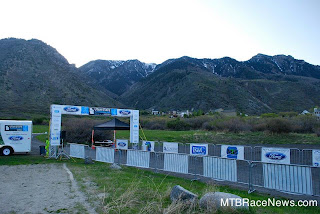 The race venue the night before.  This second year event tripled in size from last year. 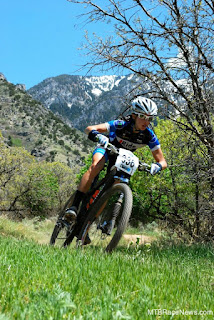 Trying to find some speed on the Rodeo downhill. 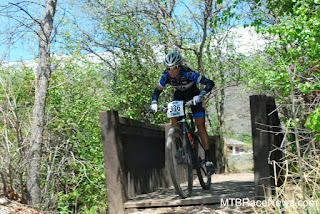 One of the many bridge crossings. 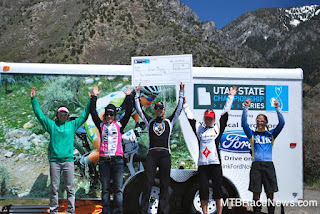