The holiday season is upon us and 2012 is coming to a close.  This means shorter days, colder weather, and that the two-year mark from my diagnosis is quickly approaching.  Although I am not planning any particular celebration, it is worthy of a little reflection.

Two years ago, on January 25, 2011, at 35 years old, I was diagnosed with breast cancer.  Like most young women who are diagnosed with breast cancer, it was shocking and unexpected.  My exact staging didn't come until a few weeks later when the tumor was removed and the pathology report revealed Stage 2 Invasive Ductal Carcinoma.  2 cm in size, ER/PR+, Her2-, Grade 3 to be precise.  2011 was spent undergoing cancer treatment including 4 surgeries (2 lumpectomies followed by a mastectomy and reconstruction and four months of chemotherapy (Taxotere, Cytoxin).  I am currently 1  year 4 months into a 5-year Tamoxifen regimen-not that I'm counting or anything.

Cancer treatment is already a distant memory, and while my cancer related posts have dwindled, cancer is still a huge part of my life and who I have become.  I continue to be under the close supervision of multiple oncologists as well as undergoing diagnostic testing every four months alternating between mammogram, MRI, and Sonocine (whole breast ultrasound).  Additionally, my current medication, Tamoxifen, is not without side effects.

Cancer has probably affected me most in the decisions I make every day.  While striving to keep this body of mine healthy and cancer free, I pass on that piece of cake that is sky high on the glycemic index.  I've replaced cow's milk with almond milk.  I make a conscious effort when riding my bike on the road to not suck in car fumes.  I use glass tupperware instead of plastic.  I pay attention to the ingredients in my personal products.  I have converted to a plant-based diet.  I eat organic.  The list goes on.... And while it may seem sad to some that I don't get that piece of cake, I don't find it sad, I find it empowering.   Even though my primary medical treatment (chemo) has ended I feel like I am actively treating my body every single day by making healthy choices.  I do have some control over what my body is exposed to!

The reason I rarely blog about cancer, despite the inevitability of cancer being entwined into my daily life, is because I still consider myself first and foremost an athlete.  An athlete who happened to undergo treatment for breast cancer.  Two years ago, there was a lot of uncertainty.  I remember being scared that I would no longer be the athlete I wanted to be.  I remember being scared for my life.  My story is about taking control of my body, not giving up, and returning to pre-cancer passions.  Sure those fears still sometimes linger.  Sure there are bumps in the road.  And yes, cancer has changed me.  But if there is anything the past two years have taught me, is that it is possible.   Whether it is returning to racing as a pro mountain biker or participating in a weekly group ride or whatever your passion may be-IT IS POSSIBLE!

So for now, this blog is about living a life full of pursing passions after breast cancer.  I can't predict the future, and we all know there are no guarantees, but I hope that this theme lasts a very, very long time.

On a lighter note, in addition to racing cross every weekend, I am back to BMX racing.  Last weekend was the first of a few races I plan to dabble in this winter.   Nothing makes you feel more like a kid than hopping on a BMX bike and throwing elbows with other women over a 35 second effort.  Check out the video.  (I have the red helmet).  I was giddy with excitement all day!

Last weekend was the 3rd annual Utah Cyclocross Cross Out Cancer race.  The race serves as a fundraiser for Huntsman Cancer Foundation and Livestrong Foundation.  Utahns don't mess around when fundraising for a good cause.  I believe over $10,000 was raised prior to the silent auction.

Turnout for this race is always HUGE and this year was no different.  Over 50 women lined up to race on what was a typical beautiful fall day in Utah. 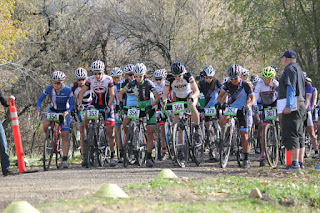 The course that was set up at Wheeler Farm was fast and tight with very little room for passing.  A good position off the start would be key to a good race.  Because of my consistency throughout the UTCX series I had a front row call up and my start was actually pretty good.  I was sitting in 3rd or 4th position going into the first S-turn and then what I call the perfect storm of bad luck/poor decisions cost me 6-7 positions in just a few short seconds.  Basically I think one of the girls in front of me went into the corner hot and got stopped.  I remember grabbing the brakes and coming to a stop thinking that we'd get going right away.  I was too close to the girl in front of me to easily swing wide so I hung tight.  Well, we didn't get going and I got knocked off my bike while the entire field rode around me. 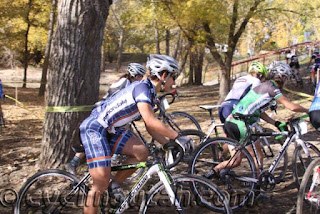 Off my bike while everyone rode away

I was now sitting in 10th or 11th position and spent the next few laps burning lots of matches to make risky passes.  By halfway through the race I had moved into 4th and could see 2nd and 3rd not far ahead but unfortunately for me I just couldn't close the gap. 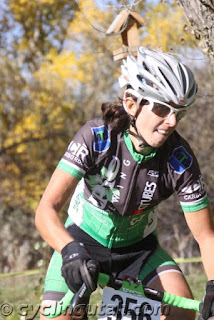 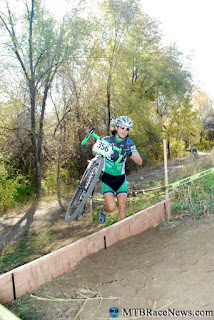 I ended up finishing a respectable 4th although I admittedly was a bit disappointed because I wasted good legs and a course that suited me with a silly mistake at the start.

Moving on....I had a second race to focus on- The inaugural Matt Bronco Bradley team relay, which also served as a fundraiser for Huntsman Cancer Foundation.  The team relay was modeled after the Little 500-think the movie Breaking Away.   Okay, if you're not a bike nut you may have no idea what I'm talking about, but anyhow, the rules called for a 4-5 person team with at least two girls.  What made it interesting was that only one bike per team could be used.   We put together a killer fast team (Mark A, Mark F, Ryan A, Jenelle K, and me).  The trick was to figure out whose bike would be the overall best fit for everyone on the team.   In the end, my bike was chosen, with the seat moved down as low as possible so that Jenelle could reach the pedals.  We ensured everyone had compatible cleats to work with my pedals and even practiced our transitions prior to the race.  We were in it to win it and that is exactly what we did. 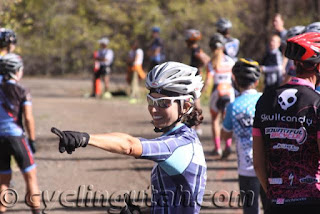 I believe there was a little good natured smack talking going on here! 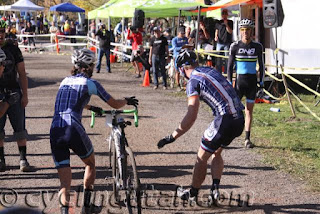 Ryan A. and I had a slick transition 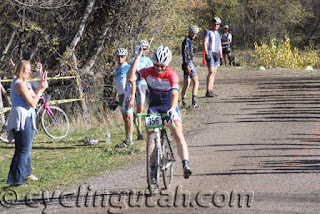 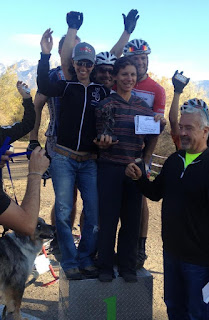 This format of relay racing was so much fun.  Thanks team for the good times.  My throat was coarse for days from all the yelling and cheering!
Posted by Jen Hanks at 11/07/2012 1 comment:

Mountain bike race season ended for me seven short weeks ago.  Since then, I've kept myself busy by racing cyclocross, exactly seven times.  So much for a break from racing!

Cyclocross racing is a completely different cycling discipline than mountain biking.  A cyclocross bike is built more similar to a road bike in geometry.  What makes the bike especially foreign to me is the drop bars as opposed to flat bars that I am used too, however the fatter tires make cyclocross bikes great on dirt and grass.  The races consist of many laps on a short course (1.5-2miles) featuring pavement, wooded trails, grass, and steep hills and obstacles requiring the rider to dismount and carry the bike.

I know.  It sounds completely ridiculous, but it is ridiculously fun.

So far, I have been very consistent placing either 3rd or 4th at all of the races. 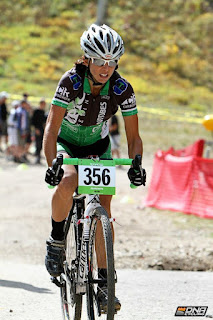 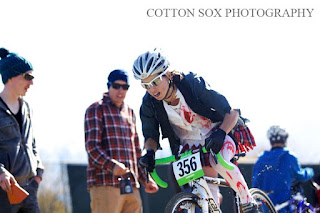 For Halloween I dressed up as a zombie schoolgirl 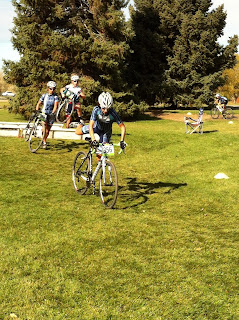 A double barrier followed by a running bike mount.
So silly, but oh so fun! 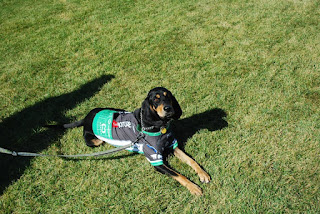 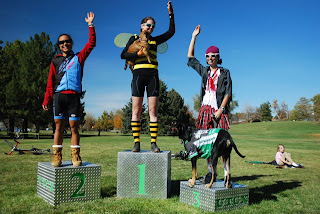 A butterfly, a bumblebee, and a zombie + 2 dogs 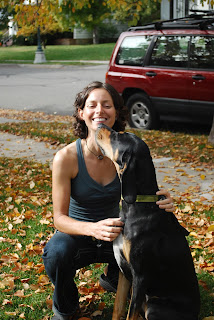