I think athletes in general have short memories.  We put ourselves through intense pain and proceed to forget about it pretty quickly.  Then we convince ourselves that it was fun and go out and do it again!  I seem to generalize this ability to forget to other areas of my life as well. These past few months, I've had lots of one-year anniversaries.  Some of the more memorable anniversaries that have come and gone include: the day I was diagnosed (1/25/11), my first surgery (2/18/11), my second surgery (2/25/11), my third surgery (3/25/11), and coming up is my one-year anniversary from starting chemo (4/15/11).  These are all pretty profound and definitely emotional experiences in my life, but the passing of their anniversaries has stirred little emotion.  I suppose that short-term memory loss has kicked in and I'm simply having a hard time remembering myself as a cancer patient.   Life has moved on, and even though I know that this experience has changed me (I could and may do a whole post on that), I am moving on with life!

That said, I do get frequent little reminders that I am still a person who has undergone treatment for cancer. A few weeks ago I had a sore rib that I could not explain.  Normal people would probably just dismiss this as a sore rib.  For me, every time it twinged with pain, I thought "crap, this can't be happening".  I am educated enough about breast cancer to know that ribs are one of the most common bones for metastasis.  Fortunately, the unexplained pain subsided, and I have long since forgotten that little bit of fear I felt.

More recently, I had some routine blood work done.  I was most interested in checking my cholesterol (my medication puts me at increased risk for stroke), iron, and vitamin D levels, however my doctor suggested we run a Complete Blood Count (CBC).  All of my blood work came back text book perfect, with the exception of my white blood cells (low), granulocytes (low), and lymphocytes (high).  Apparently I was immunosuppressed.  I received these surprising results via my online medical chart (cool) along with an email from my doctor asking if I had been ill, fatigued, etc.  Well, I had just finished a big weekend training block and thought I felt good.  Maybe I was tired?  Maybe something was wrong?  I was confused.  After speaking with my doctor she expressed concern that I may have a virus such as Cytomegalovirus (CMV) and suggested that we draw some more blood later in the week and run the CBC again.  I consider myself a fairly reasonable person, however during this short waiting time I had some very unreasonable thoughts.  First, I considered that I had leukemia (a rare, but potential side-effect of chemo), then I decided that I was fine, and then proceeded to convince myself that I had CMV and that my race season was over.  I met with my doctor Wednesday and we re-ran the CBC.  I felt really slow on the bike that day which further convinced me that I had CMV. That night my doctor posted my results and emailed me that everything was fine, my levels had returned to normal. We hypothesized that my temporary immunosuppresion was training related.  My short-term memory kicked in, amazingly I no longer felt fatigued, and I was ready to focus on the weekend race!

The race.  Once again we traveled down to Southern Utah for the second Intermountain Cup race, The Cactus Hugger.  Like the first Intermountain Cup back in March, this race course utilized the Green Valley trail system, however it was a completely unique, and in my opinion, super fun course.  Despite flubbing up some sections on my pre-ride, and the unusual week leading up to the race, I felt pretty confident that my legs were strong and I was ready to race fast.  We had a small, but elite group of pro women on the start line.   I trusted my body to sustain a hard effort for the entirety of the race and it did not let me down.   I ended up finishing in 3rd, just one second ahead of Utah superstar, KC Holley.  We pretty much traded punches and positions the entire race-I just happened to get to the finish line first.  My short-term memory has already served me well as I pretty much forgot any pain or suffering I experienced during the race (actually I'm not sure I was suffering - the course was so much fun - I was pretty much smiling the whole time) as soon as I crossed the finish line.  Instead, I'm just looking forward to my next opportunity to duke it out with the girls. 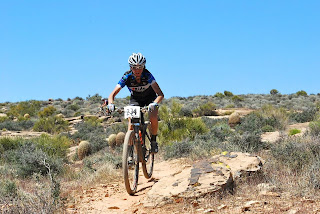 The downhill was rocky, windy, and loose.  It was fast too. 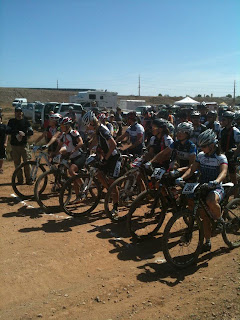 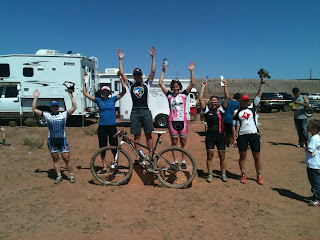