Temperatures are still soaring here in Utah so it is hard to believe that fall is here, but it is.  Days are getting shorter and evenings are just a touch cooler.  But the real giveaway that fall is here is that my glorious nine-week summer vacation has come to a close and I am back to work.

The last race I blogged about, the WB50, was only a month ago, but there is a lot of updating for that short of a time.  I've raced three more midweek races, the Steamboat Stinger in Steamboat, CO, and most recently the Mt. Ogden 100k at Snowbasin Resort.  On top of that I had a case of food poisoning which resulted in an angry and fickle gut and my first legitimate cold since finishing chemo.

I'll spare the details of my food poisoning, and start with the Steamboat Stinger, a 50-mile race utilizing the Howelsen Park trails in Steamboat, Colorado.  This was one of the few races that Shannon was able to compete in last year and he enjoyed it so much that we both decided to return this year.  The only problem was that the race date fell the weekend before the Mt. Ogden 100k which was to be my longest and most grueling race of the year.  I was a bit leery to race a full 50-miler the weekend before the Ogden race, so I asked my friend Erika Powers to be my teammate and we entered the Duo Womens' category.  Race day I woke up to a sore throat and rainy skies.  I attributed the sore throat to the smokey air from a nearby forest fire.  The rain, although not terribly cold, did not do my newly developing sore throat any favors.  Despite this, I was able to race relatively strong and put our team into the lead. Erika extended that lead with a super fast lap as well. 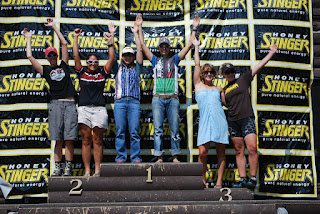 Erika and I on top of the podium
Photo: MTBracenews.com

By the time we returned home Sunday my sore throat had progressed and by Monday I could barely swallow.  Fortunately Tylenol was able to ease the pain.  Feeling a bit stubborn and not wanting this "cold" to slow me down, I went ahead and raced the Tuesday night Midweek race. In hindsight, this is probably not the best way to get over a cold quickly.  The race was hard, but at least I got a super cool photo out of it! 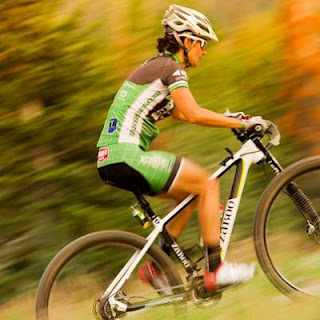 The Mt. Ogden 100k race was coming up quickly and for the rest of the week I was unsure if I would be healthy enough to race.  Fortunately, by Thursday I was feeling better and Friday normal.  I decided to give it a go figuring that ultras of this magnitude are often more about racing smart, proper fueling, and maintaining mental focus.  I was up for the challenge.  Actually, I was really nervous about the challenge.

My start was less than stellar and the top four girls rode away on the first climb.  It soon became a battle for 5th between me and endurance specialist Erin Collins.  She'd pass me, I'd pass her and back and forth it went for the first lap and a half.  We seemed to be climbing and descending equally well, just at different times.  In the end, I had a little more and was able to pass and drop Erin for good on the super long climb at the beginning of the 2nd lap.  I finished 5th, was pleased with my performance, but more importantly pleased with my mental fortitude for hanging tough till the end.  My race nutrition for the 6.5 hour effort was dialed using solely Carborocket, Hammer gel, electrolytes, and 1/2 banana. 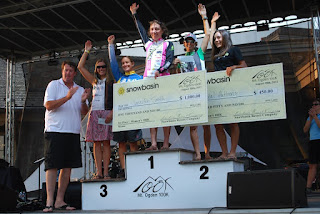 Kudos to race promotor Steve Andrus for putting together a fantastic event.  The course was well-marked, volunteers were awesome, and aide stations well stocked.  Steve also went above and beyond in supporting the pro women.  He comped our entries to encourage participation and payout was equal and deep.  In a sport where it often seems the women's race is an afterthought-despite racing the same distance as the men and our equally tough fields-this was very much appreciated.  This one is going on the 2013 schedule!

Now, even though Fall is here, race season is still going strong.  There are quite a few big events left in Utah, with my current focus being on the final race of the Utah State Championship Series, The Draper 50.