Wow, a whole month has gone by since my last post.  Obviously I think my life is mundane enough that I'm haven't been inspired to blog, but then again I have traveled out of town on bike trips three of the last four weekends~more traveling and riding than 2011's entirety~so maybe March is blog worthy.

The weekend after the St. George race I traveled down to Moab with my road bike.  I can probably count on both hands the amount of times each year my road bike gets to go outside~it lives on the trainer~and I am 100% certain that it has never traveled out of Salt Lake City to be ridden.  But, it was the Skinny Tire (read: road bike) Festival in Moab and a big fundraiser for local cancer organizations.  I went to Moab and met up with the Above & Beyond Cancer RAAM (Race Across America) team. Above & Beyond is a cancer foundation based in Des Moines, Iowa and I had been communicating with them about joining their team to Race Across America in June.  And while I have since decided that my body is just not quite ready to race (and then recover) from 7-10 consecutive days of hard effort, it was a fun weekend meeting inspiring new friends nonetheless.  I admit, it was a bit melancholy to be in Moab without a mountain bike~especially because we rode past many of my favorite trailheads. 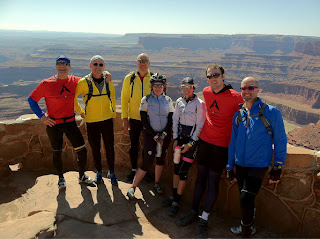 Day 1: We rode to Dead Horse Point.  Funny.  I had never been there before.
Photo: Jim Kirsner 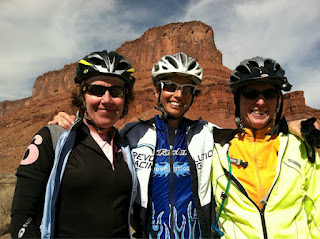 Day 2: Cruised along the Colorado River with some cool girls.  Stacy, Me, Carrie.
Photo: Jim Kirsner
The following weekend, Shannon and I traveled to Southern Utah for the True Grit.  True Grit is a 2nd year event held on some pretty classic St. George, Utah trails.  There are three race length options: 25 miles, 50 miles, and 100 miles.  While the 100 mile option seems just crazy in March, Shannon opted for the 50 mile race and I stuck to the even shorter 25 mile race.   Although it would have been fun to mix it up with the 50-miler girls, I feel that March is a little too early to push my body at race pace for 50 miles.....especially this year!  My race was pretty uneventful.  I ended up riding by myself the entire time with the exception of when I decided to turn around and climb back up a downhill because I was convinced I missed a turn.  I rode back to the next racer and he reassured me that I hadn't missed a turn so we proceeded down the trail once again.  The trails were stellar, the company good, and I ended up with the win.  And despite the gloomy weather forecast for Sunday, Shannon and I snuck in 3 hours on Church Rocks before heading home.

Which brings us to last weekend.  My first weekend home in a month.  I was pretty tired from all of the traveling/racing/training of the proceeding weeks so my weekend mountain biking was relatively mellow.  I also had the opportunity to ride bikes with a great girlfriend who I probably haven't ridden with since 2005! 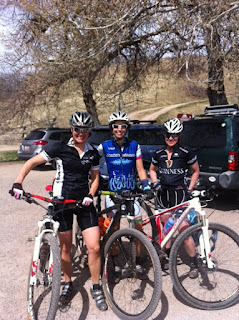 What a difference a year makes

It is an annual tradition for Shannon and I to travel to Southern Utah the first weekend in March for the first mountain bike race of the season.

Last year, it was one of only three races where Shannon was able to race.  I was able to ride my bike, but racing was out of the question.  I had just had a second lumpectomy one week prior and the margins were still not satisfactory.  I was in the process of making the decision to try for another lumpectomy and follow that up with radiation or to go ahead with a mastectomy.  I had also just found out that chemotherapy was certain which made my future as a mountain bike racer very uncertain.  Despite everything that was going on, our 2011 annual trip to St. George, was a great weekend of friends, riding, and warm weather.

What a difference a year makes!  This past weekend, Shannon and I once again made our annual trip to Southern Utah for the first mountain bike race of the season.  This time, I was planning on racing with the pro women for the first time since 2010.  I had every reason to go into this race with confidence.  I have been training hard, riding well, and things have generally just been going good.  Despite all the positives, I had a lot of self-doubt the week leading up to the race.  Was I racing in the right category?  If I couldn't keep up this weekend, would I ever be able to race with the pro women again?  Would I be full of doubt and afraid to push myself hard?  Would my body shut down midway through the race?  Is racing and pushing my body so hard good for my health?  and so on......

As soon as the race started, I no longer had questions.  In fact, I no longer had thoughts.  I didn't feel like 'that girl who had cancer', I became a 'girl racing my bike'~as hard as I could.  By the end of the race, my questions were answered.  Yes!  I was racing in the right category and I can keep up with the incredibly fast local pros.  As the race progressed, I became less and less afraid to push myself hard and no, my body did not shut down midway through the race.  Most importantly, I am confident that racing is good for my health.  It simply has to be.  If I couldn't race, I wouldn't be happy, and that is not good for my health.

I ended up finishing 3rd in a very talented field of pro women and was happily surprised that I put down my fastest time on the course ever.  Like I said, what a difference a year makes!  This year, it was a great weekend of friends, racing, and warm weather. 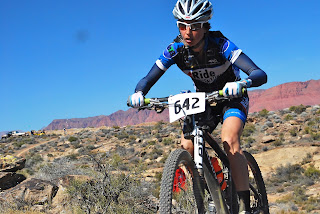 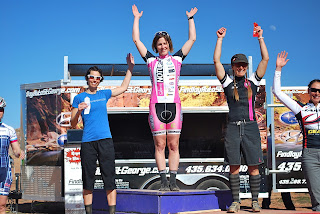