Well, I survived my first week of Radiation and so far everything is going smoothly.


Radiation really is a quick process.  I arrive to Huntsman, check-in, go to the dressing room, change into a gown, get called back, get positioned, get radiated, change, and then leave.  On Tuesdays my appointments are a bit longer as I meet with my radiation oncologist for an exam and consult.  One other day each week, x-rays are taken to make sure my positioning (ie body organs have not changed location inside my body) is still spot-on.  That said, it still takes a small chunk of my day that could be spent doing something more fun and it is mentally exhausting to feel like a patient every single day.
For this reason, Shannon decided that I get a surprise at the end of every week I complete radiation.  This week I got a climbing training board.  I guess he thinks I need to work on my pull-up:) 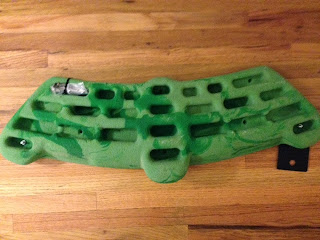 Additionally, scheduling has been a bit of a nightmare while trying to maintain a steady work schedule, but I have a tentative schedule through November 27th, although the final treatment date has not yet been completely determined.

As for side effects, nothing significant yet, which I think is pretty typical.  From what I understand, skin burns and fatigue usually set in later in the process.  That said, I am taking incredibly good care of my skin.   That means taking off my sweaty sports bra right after a workout, not wearing a camelback or backpack that may rub on the irradiated skin, and lots of lotions! 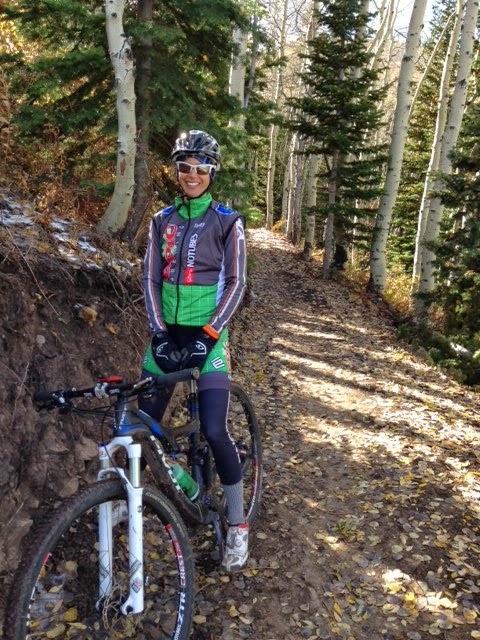 The Fall riding has been spectacular!

Honestly, I feel the best I have felt since before I started chemo back in July.  Since I refuse to wear a heart rate monitor at the moment, my ride efforts have been based solely off perceived effort.  I do sometimes ask Shannon what his heart rate is to get an idea of what my perceived effort is versus his effort.  We can already tell that I'm recovering and regaining strength since finishing chemo as Shannon's heart-rate was a solid 10-20 bpm minute higher on yesterdays ride than it usually is when we ride together, while my perceived effort was the same as it has been throughout treatment (conversation pace).

It is amazing how resilient the body is!

More photos can be found here!

Radiation starts Monday and I have a plan in place to hopefully help me not only survive, but to thrive over the next 5-6 weeks of daily treatment!

Radiation works by damaging the DNA of rapidly dividing cells (ie. cancer cells) hopefully resulting in cell death.  Unlike chemotherapy that is a systemic treatment targeting all rapidly dividing cells in the body; radiation therapy is a localized treatment that targets specific areas.  For me this will be my chest wall, axillary lymph nodes, and supraclavicular lymph nodes.

My two primary goals while undergoing radiation are to 1-Support the treatment in being as effective as possible and 2-Protect healthy tissue (skin & lungs) that are exposed to radiation from damage.

After consulting with my Nutritionist this week, here is some of what I learned:

Other potential strategies to improve the efficacy of radiation therapy (Note: All of these strategies have some supporting research, although I am going to refrain from going into detail)

-Improve Tumor Oxygenation: This can be done through diet, supplementation, and improving circulation.  One strategy that I plan to employ to increase circulation immediately prior to my radiation treatments is exercise.   Free and effective and can easily be done by riding my bike to treatment!  Other options include a jog on the shoreline (located right behind Huntsman), running up/down the huge flight of stairs outside of Huntsmen, or even a short spin on the stationary bike in the Wellness Center which is just down the hall from the radiation wing.  Deep breathing and taking warm baths also increase circulation although deep breathing is contraindicated during the actual  radiation treatment as increasing lung volume may increase radiation exposure to lung tissue.

-Depleting Tumor Glutathione Levels:  According to my nutritionist, and backed by some research, whey protein supplementation appears to make tumors more susceptible to effects of cancer treatment (chemo AND radiation) by depleting glutathione while boosting levels of this protective nutrient in healthy cells.  Whey supplementation also helps me meet my increased protein needs during treatment.

Dietary strategies I am employing to meeting my second goal of protecting healthy tissue include glutamine supplementation, licorice tea, tumeric, and 2-3 servings of organic soy daily. 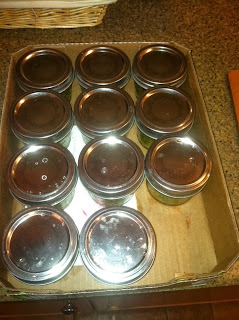 Ever hear of Dal?  Well I hadn't until my nutritionist suggested I make some with Mung Beans.
Dal is an Indian soup with loads of nutritional benefits.  Mine is made with Mung beans because Mung beans appear to reduce side effects of radiation.  I also made mine with tumeric, cumin, garlic, ginger, spinach, and some organic bone broth to boost immunity.  I am freezing these individual servings so that I can have one small bowel each day I receive radiation treatment.

Additionally, radiation can have adverse affects on skin.  I am armed and ready with an arsenal of skin care products including Aloe Vera, Calendula lotion, Coconut Oil, and Carolla's Beeswax. 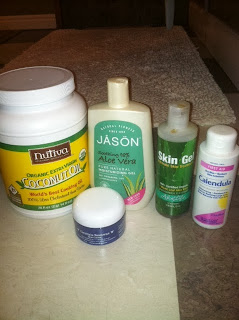 Surely one of these will be effective!

With my plan in place, I am feeling confident as I start this next phase of treatment.   Additionally, my team at Huntsman continues to blow me away with their extraordinary care.  They truly go above and beyond in working with me so that I understand and feel confident in my treatment plan.

In other news, Friday was three weeks from my final chemo treatment.  Instead of going in for an infusion, like I have been doing every three weeks since July, I underwent an echocardiogram and bloodwork to see how my body is recovering from chemo and  I received the best possible news.  My echocardiogram revealed an ejection fraction of 69.  These results indicate that my heart sustained absolutely NO acute heart damage from chemo.  What a HUGE relief!  On Saturday, instead of feeling like dirt like I would if I had chemo the day before, I rode hero dirt in Park City for three hours.  It was amazing! 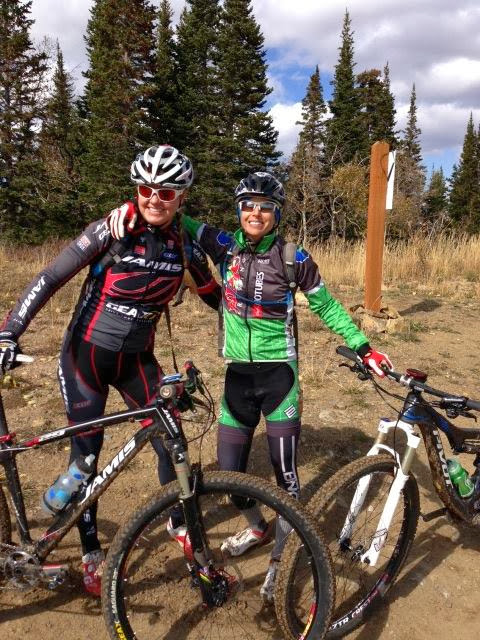 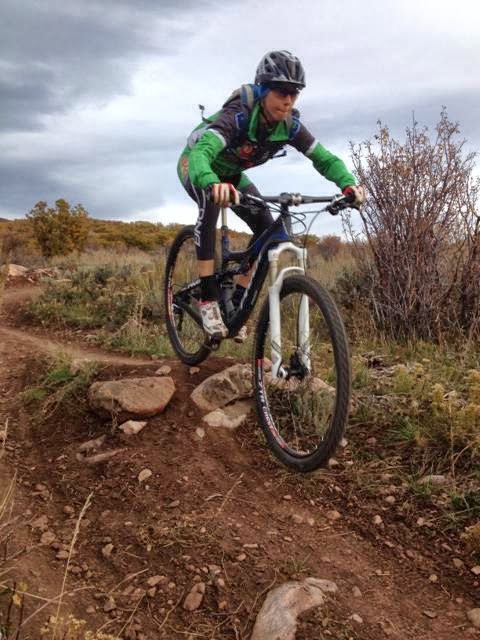 Rippin' Glenwild on the 429 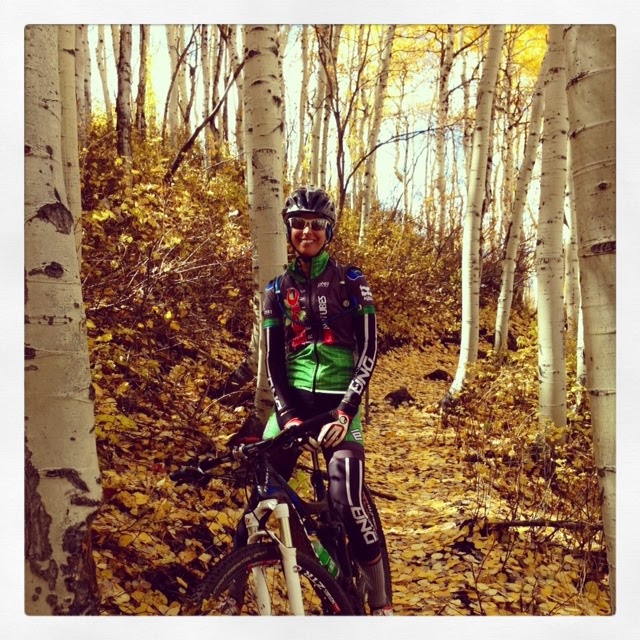 It was raining Aspen leaves today!

I have learned over the past few years of dealing with cancer that when something scares me, instead of  turning my mind off and not thinking about it, I do the opposite.   Some may call it hyperfocusing.  I like to call it an effective coping mechanism:)  So with radiation looming in the near future, it was time to finalize a plan.  My week went like this:  meet with radiation oncologist, have a little freak-out, bury myself in 'research', come to terms with my treatment plan.  Phew.  Exhausting!

Without boring you with details, it all comes down to this:  Benefit versus risk.  The benefit of treating cancer aggressively is that hopefully it will never, ever come back (although there are no guarantees).  The risk of more aggressive radiation treatment is radiation exposure to my lungs and possibly my heart, not to mention the 'other' things it does to your body.  Lung fibrosis and heart damage are not side-effects that an athlete, or anyone for that matter, wants to experience, however neither is another cancer recurrence.  But, it is what it is, and you can bet that I will be doing my damnedest to protect both of these highly valued organs.

First up, I have an appointment with my nutritionist next week.  We will be changing my nutrition/supplement plan to support me through radiation.

Additionally, even though I am pretty sure that there is not any research to support the use of an incentive spirometer and/or powerlung to prevent/reduce lung fibrosis during radiation, that isn't going to stop me from using both! 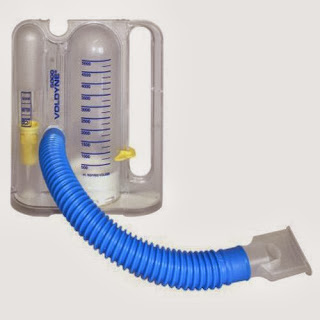 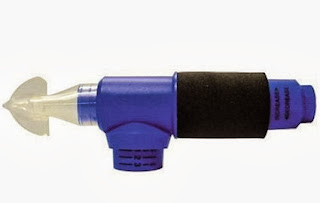 Speaking of lack of research, I think more research needs to be done on supportive care while undergoing treatment for cancer.  But, that is a topic for another day.....

The icing on the cake this week is that I became the proud bearer of four new tattoos.  As cool as that sounds, these are not sexy nor even bad-ass tattoos, they are to permanently mark my body for radiation fields.  I suppose that is pretty bad-ass; I hope my new tats will make the radiation fields very precise and help avoid all my favorite organs.

So, radiation starts October 14th.  It is a total of 25-30 treatments, 5-days/week, for a total of 5-6 weeks.  While side effects vary from person to person, by the end of treatment I can expect some pretty significant burns to my breast, underarm, shoulder, and back as well as cumulative fatigue.  Just the thought of going to the hospital 5days/week for 5-6 weeks is exhausting in and of itself.

That said, I hope to make the most of my non-treatment time.  And since the best thing you can do to combat side effects during treatment is exercise,  you can bet I will be out on the bike, hiking, running, and lifting weights as much as I can!

I should be done with treatment just in time for Thanksgiving.  My reward?  My first trip out of town since I started treatment for this recurrence back in July and also my first "vacation" to our condo in St. George.