Part of being kind to myself is not doing races that are so crazy hard that they make me feel like crap for a week.  So, even though the National Ultraendurance Series was making a stop less than four hours from my home, I opted to race the 50-mile version as opposed to the full hundie (well, 90 miles to be exact).  I like to think I made a smart choice.  Racing 90 miles on dirt is hard.  Doing it in March is... well....(put your own descriptor in here)

We drove down to St. George Friday afternoon and got the bikes out on some dirt.  This was my first real ride on singletrack on my new Pivot Les and it didn't take long before I felt totally comfortable.    Good thing too as the True Grit course is one of the most technical courses I race all year.  The bike felt fast, but I didn't yet know just how fast it was. 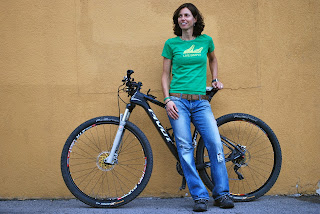 Me and my new buddy

We then went through the pre-race routine:  got dinner, Thai food of course, registered, and put together our feeds for the following day.  Then off to bed.  Even though my race didn't start until 9, we had a 5 AM wake up call to get Shannon to the venue in time for his 7AM start for the full 90 miler (he chose to race the full True Grit.  You can add your own descriptor of his intelligence here:) Note:  Shannon KILLED IT and finished 3rd overall singlespeed!!!  Anyhow, anticipating this early morning alarm, I did not get the best night's sleep.  Regardless, I woke up feeling mostly rested and any lingering drowsiness was soon masked by some quality caffeine.  Then I drove Shannon to the race in the dark.  Saw him off in the dark.  Sat in the car and waited to get ready for my race.

About an hour before my race it was time to get going.  Fortunately the caffeine hadn't worn off yet!  I got a short, but effective warm-up in and rolled to the start line.  The Pro Women were to start with all the other female racers behind about 300 men.  Our start was a bit confusing because I thought it was women only, yet there were a few men mixed in.  So off the start I hopped on a guys wheel and waited for someone to attack.  No one did.  No one even rolled up next to me.  So at about 3 minutes in, I pedaled down a hill and realized that no one was on my wheel so I just pedaled away.  Attacking at 3 minutes into a 50 mile race wasn't exactly my plan, and some may say that it is not very smart, but I wouldn't really call it an attack.  It just kind of happened.  I led for the next 4 hours and 45 minutes.  Although I didn't see another girl the entire race, partly because I never looked back, it never got lonely; there were plenty of guys to pass, cheer for, and ride with.  In the end, I came away with my second win of the season.  HOLY COW!!! 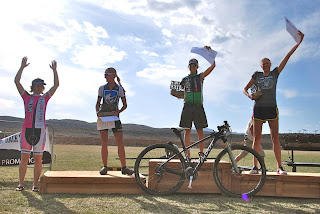 Off to the races

It has been a tough winter to train in Salt Lake City.  The weather has not been cooperative.  The combination of miserable cold and poor air quality has led me to spend more time on the trainer, commuting to the mountains to ride, and venturing down to the desert to get in some solid blocks of training, not that I'm complaining about "having" to ride in the desert!

Cruddy weather doesn't stop Utah racing from starting the first week of March.  Last Friday, we traveled down to St. George, Utah for the first ICUP of the season aka my first race of 2013.  I was a combination of nervous-it had been ten whole weeks since cross season ended- and excited to race.  Mostly excited.   When we arrived in St. George I was pretty giddy.  The weather was perfect and my legs felt good; it was hard to contain myself on my pre-race ride.  After riding we picked up some Thai food for dinner.  Riding, of course, is my favorite part of traveling to St. George.  Getting yummy Thai food is a close second:)

Anyhow, back to the race.  Here's how it went down:  The Pro Women's field was small but fierce with anyone of us capable of coming out on top.   My plan was to attack at the first little hill which was only  a few minutes into the race.  Nothing like being a bit over eager to take the lead!  So, I led through the rollers and essentially pulled the other girls to the first legitimate climb where Meghan attacked and took the lead.  Our pace through the wash was manageable, but when we hit the double track climb I couldn't quite match her speed and she got a small gap.  Joey Lythgoe soon came around me too and tried to bridge up to Meghan.  She wasn't quite able to catch Meghan before the downhill where I was able to make up some time before the second climb of the lap.  On the second climb I passed Joey and set my sights on Meghan.  I knew I had to pass her before we started descending.  I went as hard as I could and snuck by her just as we went into a singletrack section right before the final downhill of the first lap.  I led the race for the final 2 laps, trying to race fast, smooth, and smart all while being too afraid to look back. 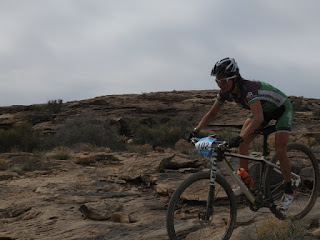 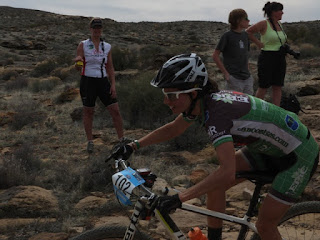 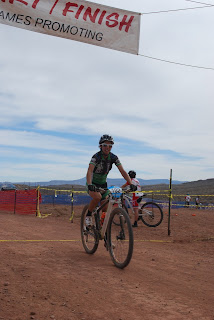 This photo has a story:  Shannon heard I was winning so with one lap to go in his race he stopped and waited for me to finish, took a photo, gave me a hug, and then took off for his final lap.  Best.husband.ever!

So, all those freezing rides in the cold and boring sessions on the trainer seem to be paying off.  I was really psyched to have won, but even more so to beat my goal of a sub 1.5 hour race time.  2013 is off to a really good start!  Full race report here.

Thoughts:
2013 Mantra remains the same:  No excuses, have fun, be kind to myself! 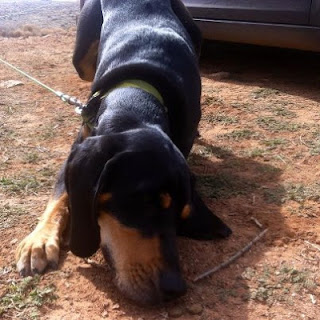 Dizzy loves coming to the races.
The red sand makes him so dirty that he looks like a Redbone (as opposed to Black and Tan) Coonhound by the time we go home.

Next up we travel back to St. George for the True Grit.  I will be riding this beauty! 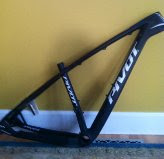