My six-month anniversary for finishing chemotherapy has come and gone.  It is already hard for me to fathom that just six months ago I had days where my resting heart rate was 120 and when I would try to ride my mountain bike (for whatever reason) my spinal column felt like it was going to explode.  The day was marked by a routine (6-month) visit to my medical oncologist.  The appointment was pretty straightforward; reviewed how I am doing since finishing chemotherapy, discussed any side-effects I'm experiencing with Tamoxifen, and we all poked and prodded at that little nodule I found in November.  The consensus with this team is that it is probably a normal lymph node that can be felt because of my lack of adipose tissue in my breast.  I was then reminded to not poke and prod at it.

The Huntsman medical oncology team is great, but the most interesting part of the visit was getting the results from my labwork.

Since I like numbers, I made a chart comparing how my lab results fluctuated over the course of my treatment and recovery from treatment.


Note: My labwork was much more comprehensive than this summary, but these are some of the values I was always most interested in.

Definitions:
L-Low value
H-High value
Chemotherapy's affect on bone marrow:  Chemotherapy suppresses the bone marrow.   Bone marrow produces cells that become white blood cells, red blood cells, and platelets making people who are undergoing chemotherapy treatment more susceptible to infection, illness, and anemia.
WBC count:  Cells of the immune system that defend the body against infectious disease.  The Neulasta shot I received after each chemotherapy treatment helps the bone marrow produce more wbc.
RBC count:  RBCs deliver oxygen to the body tissues.  The Neulasta shot has no effect on RBC production.
Platelets:  Platelets help the blood clot.  High levels of platelets may indicate anemia among other things.
Hemoglobin: Protein in red blood cells that carry oxygen.  Lower than normal hemoglobin may indicate anemia among other things.
Hematocrit:  % of the volume of whole blood that is made up of red blood cells.  Lower than normal hematocrit may also indicate anemia among other things.
Ferritin: Protein found inside cells that stores iron so your body can use it later.  Low ferritin may indicate iron-deficiency anemia.
Interesting to note:

My WBC count increased while undergoing chemotherapy.  This is because after each infusion I got a Neulasta shot that helped my bone marrow produce white blood cells.  Clearly this shot was effective in doing its job and I didn't have to become a complete germ-o-phobe during treatment.
I was always interested in the value of my RBC count because the lower my RBC, the more fatigued I felt, and the less I was able to do.  If it dropped too low I would have needed a blood transfusion.  Fortunately it never came to that.
My lab results indicate that at a cellular level my body is back to pre-chemotherapy status!!!!!!!!, I am now most interested in my ferritin level. My plant-based diet is not especially high in iron and my ferritin levels are on the low end of normal.  Because of this, my oncologist recommended I take a small iron supplement.
Now that my six-month anniversary is in the books I look forward to my seven-month anniversary being celebrated by my first MRI and Sonocine since finishing treatment.  That comes after my little trip to Hawaii with my favorite person in the world though!
Posted by Jen Hanks at 12/26/2011 4 comments: 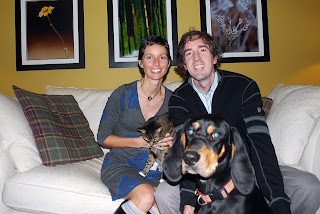 After my little scare a few weeks ago, I quickly compartmentalized the experience and moved on.....

Last weekend Shannon and I traveled to Las Vegas.  For Shannon it was part work/part play.  For me, it was all play.  How did I chose to spend my time in Vegas?  Mountain biking of course!

The trip started in standard Shannon and Jen fashion.  We left Wednesday night after work and stopped in St. George, Utah for a quick night ride on Prospector.  We soon realized that we left the key for the Rocket Box (our rooftop storage) back in Salt Lake City.  No worries, all of our bike stuff was in the car so we proceeded with a fun spin on Prospector.  Once we were done with our ride we started scheming how to get the Rocket Box open.  I had a personal interest in this because it was all of my clothes that were up there.  To make a long story short, Plan A panned out; we made it to the Las Vegas REI just before closing and they were able to get us a key to open our box.  Phew.

We then drove over to the Wynn hotel right on the Las Vegas strip.  Not typical lodging for a mountain bike trip, but Shannon's conference was at the hotel, so it was convenient and free.  It was pretty comical hauling our bikes through the casino everyday. 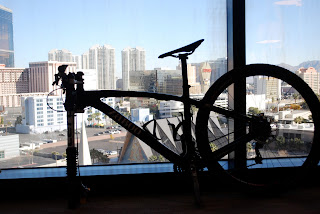 My bike hanging out in the room 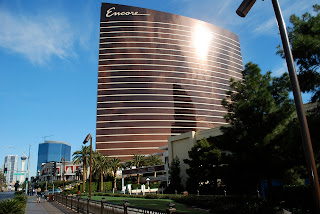 Fancy hotel on the strip
Thursday, Shannon was in conference all day, so I was on my own.  Never one to have any difficulty entertaining myself,  I cruised down to Bootleg Canyon with both my bikes.  Yep, the BMX bike made the trip to Vegas as well.  An hour on the pump track at Bootleg was worth it!  Friday and Saturday Shannon was able to do some afternoon riding with me.  We rode Bootleg Canyon and Blue Diamond and while the riding was fantastic, I'm pretty sure our lack of trail knowledge resulted in us missing some epic singletrack. 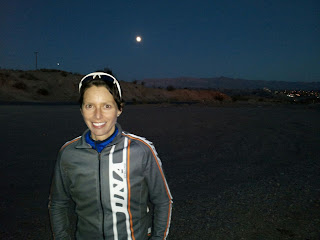 Bootleg Canyon. We rode till dusk everyday.
Saturday night, disaster struck.  Shannon got sick.  Blah. Our delightful weekend came to an end, at least for Shannon.

Sunday's plan was to meet friends and ride in St. George.  Ride time 10:30 AM.  I woke up plenty early however we got on the road admittedly a few minutes late.  About an hour into our drive I looked at the clock in the car and it said 10:30.  Damn.  St. George is in a different time zone than Vegas.  Because all of our electronic devices automatically switch times, we overlooked this minor detail.  Oops.  We were now running more than a few minutes late and speeding up I-15 wasn't going to make up for this! Luckily, the planned ride had a few different trailheads so I met the group about an hour into the ride and didn't hold them up too much.  Lucky for me too as the riding and company were fantastic.  I rode hard and felt great which was especially pleasing since it was my 5th consecutive day on the bike. 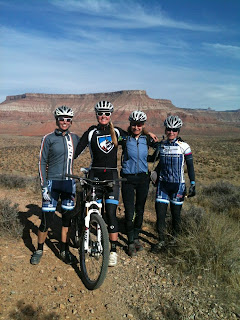 A lot of girl power in this photo!
Never one to want me to miss a ride (or a good time for that matter), Shannon waited patiently in the car, feeling like dirt, while I rode for 3 hours.  He didn't complain once.  I guess I'm on cooking duty this week!
Posted by Jen Hanks at 12/13/2011 1 comment:

I realize that Thanksgiving was actually last week; hopefully the late post has allowed me extra time to reflect on what I am truly thankful for.

If you asked me last Thursday what I am thankful for, I probably would have said the typical (and I suppose some atypical) things like a husband who rocks-he really does by the way-I'm not just saying that, great friends and family whose small and large gestures of support will never be forgotten (you know who you are-thank you), new friends who I only met because of mutual unfortunate circumstances but whose incredible spirt and zest for life helped me realize how great life can be after treatment which allowed me to (on good days) enjoy life during treatment, a warm home, yummy food, a ton of bikes including a brand new to me used BMX bike, a mischievous and energetic puppy who has turned into a great hiking/running partner, a loyal and tolerant cat who reluctantly puts up with above mentioned pup, a head full of hair, increased energy and strength every single week, and of course being healthy.

Saturday night, my perspective changed pretty quickly when I found a small nodule in my left (non-mastectomy) breast.  I tried to stay calm, take a deep breath, and convince myself that it was nothing-stastically 80% of the time it is nothing-but when you have heard the words cancer before there is a new sense of urgency when you find something abnormal.  Admittedly, my mind was racing with every potential scenario.  I had already decided that I was going to get a mastectomy; obviously my breasts were doomed.  I rescheduled my training and race season.  Mastectomy in December, on the trainer two weeks later, mountain bike at four weeks, legitimately training at 6 weeks?  Oh god, would I need chemo?  I was also thinking, perhaps prematurely, what would I do with my work bag?  Certainly a sentinel node biopsy would be done and after this procedure one of the precautions (to reduce lymphedema) is to avoid compression on that extremity.  The type of compression that a heavy work bag slung over your shoulder provides.  I already follow these precautions on my right side....now my left too?

I knew I needed an ultrasound for peace of mind.

So Monday it was back to Huntsman for a mammogram, ultrasound, and exam.  The mammogram and ultrasound found nothing abnormal.  I was not surprised the mammorgram was negative, mammogram has never been a good diagnostic tool for me, but I was incredibly relieved that the ultrasound showed nothing as well.  Phew.  My surgical oncologist and NP were able to palpate the nodule, but only when I was in certain positions.  Specifically, laying on my right side with my left arm over my head.  Anyhow, their best guess is that it is a lymph node, fibrous breast tissue, or part of my pectoralis major muscle.  I was told by multiple medical professionals that because I don't have much adipose tissue, that any normal lump or nodule feels more pronounced.  The best news.  No mastectomy and no need to reschedule my race season.  I follow-up in two months. Another phew!!!  and a deep sigh of relief.

So....I am still thankful for my above typical (and atypical) list.  But I am also reminded in a pretty harsh way that I am mostly thankful, beyond words, that I continue to have no evidence of disease.

On a lighter note, I got my very first post-chemo haircut this week.  Like I said, I am thankful to have hair, even if it is short. 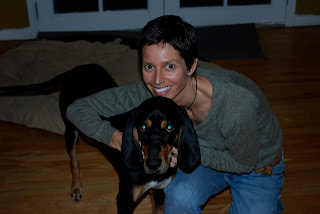 I'm also thankful for my brand new used BMX bike.  This thing is so cool.  It is just asking to be hammered.  Whenever I see it in the garage, I have to ride it up and down the street, and visualize pumping it over BMX jumps.  It is also the least expensive bike I have ever purchased.  It cost less than my first Univega mountain bike that I bought way back in 1994! 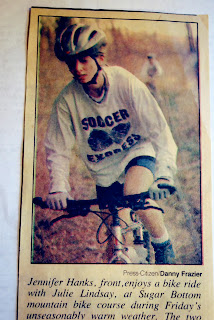 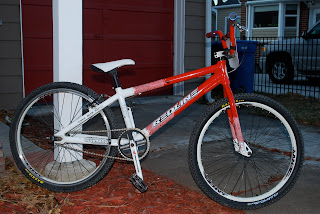 Brand new to me used Redline BMXer
PS-Huge shout out for the wonderful staff at Huntsman Cancer Institute and although I am very thankful for them, I hope I don't have anymore unplanned appointments with them!
Posted by Jen Hanks at 12/02/2011 4 comments: