2015 has had its ups and downs.  I am going to focus on the ups because they are just more fun to talk about and certainly more on topic.

First, my routine MRI came back negative.  This means ALL CLEAR!  Despite this being "routine" I admit to having some (haha.  understatement of the year) scanxiety as I am at ~2 years out from my recurrence; approximately the same amount of time between my original diagnosis and recurrence.  It was a HUGE relief!

I also had some notable races this summer.  First up was the Brian Head 50 miler in Brian Head, UT.    7000+ feet of climbing over nearly 50 miles at 10,000 feet elevation was no joke.  The Pro class was devised of primarily strong Utah locals.   My race was fairly uneventful as I raced in 2nd place off the gun and finished in 2nd nearly five hours later.  The highlight was that my climbing legs were alive and well and my radiated lungs handled the high elevation well.  The challenging, rugged, and technical course added to my stoke! 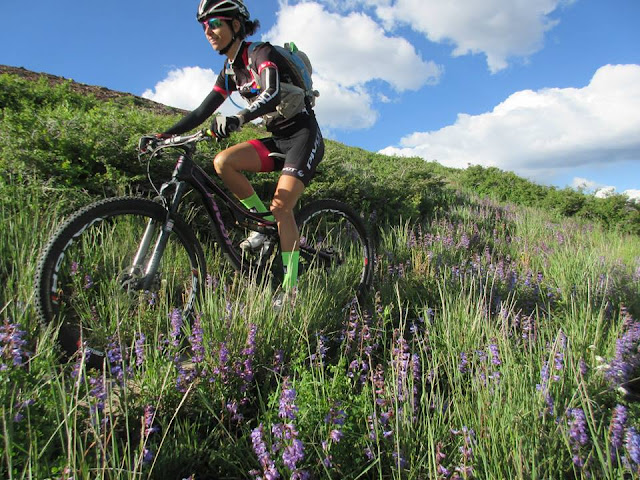 The wildflowers in Brian Head perfectly match my bike! 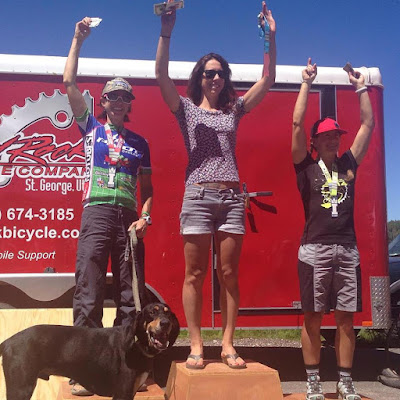 Last weekend was the Park City Point to Point.  The PCP2P is a point to point race that climbs over 14,000 vertical feet over 75+ miles of single track while traversing 3 ski resorts (Deer Valley, Park City, The Canyons).  With a large pro payout it attracts some of the fastest ultra endurance racers in the country.

I know how hard the race is.  I raced it pre-cancer in 2010.  After my diagnosis and especially after my recurrence I swore off doing races this challenging.  As silly as it sounds with all the racing I do, for a while I truly didn't think my body could tolerate this challenge and a small part of me maybe thought it was not healthy for me.  Well Dr. Irwin put my 'bad for my health' concern to rest and I have come to the conclusion that the mind is stronger than the body.  I wanted to race the P2P so I was going to race it!

Despite the 4:45AM alarm, I slept solidly the night before the race.  While I love to sleep, I'm not sure this is a good thing as often my best races are after a crummy night of sleep.  Go figure!  I woke up happy, excited to race, and pleased that the overnight cloud cover resulted in a relatively warm Fall morning in the mountains. 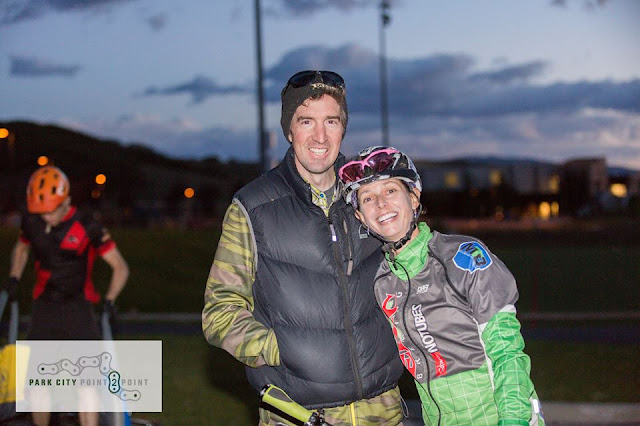 It was still dark when I arrived to the start.  I was happy to be greeted by Shannon.

While the temperature was mild, the wind was howling.  Unfortunately the wind was out of the West, which meant we would have a head wind for the majority of the race.  My race started down the Round Valley bike path at a mellow pace.  Once we hit the dirt, the speed ramped up.  I rode conservatively as I didn't want to redline this early in the race and sabotage finishing.   Round Valley is my least favorite part of the race.  The sun is still blindingly low and the Expert male racers are all amped up making sketchy passes.  Once we hit Skid Row and started heading to the ski resorts I found my climbing rhythm and started passing some of those over-eager dudes back.  I chugged along at a nice pace until the first feed. 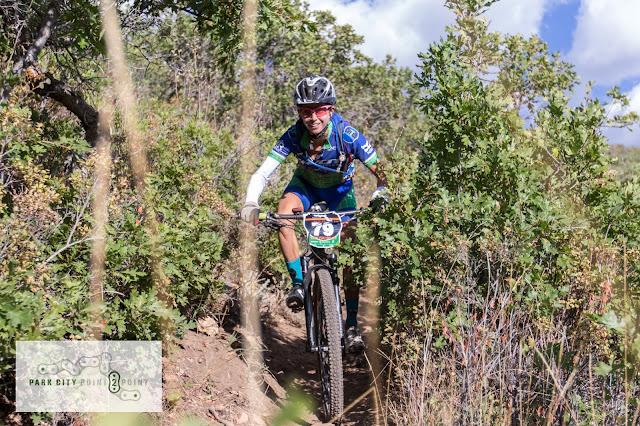 My feed was super quick (huge shout out to my stellar support) and I was on my way climbing up Team Big Bear.  I immediately noticed the heaviness of my pack and food on the steep climb to Guardsmen (Note to self:  consider taking feed at Guardsmen instead of Silver Lake).  Additionally, my stomach became a bit angry and while not debilitating, it was annoying.  This lasted the next couple hours, but I marched along.  By the time I got to Shadow Lake, my stomach felt better, I had been refreshed by some cool mountain rain, and there was a nice, long downhill to look forward to.  Finally the wind was at my back.  I sailed into the 2nd feed at Park City Mountain Resort and was greeted and cheered on by my hubby, Mom, and support.  I had so much happiness to have made it this far and I was confident I could finish the race. 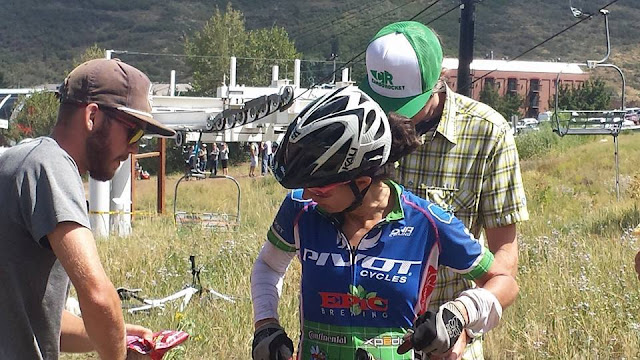 Stocking up at the final feed of the day


I exited the feed and climbed the mean little kicker of a climb before I started ascending the final sustained climb of the day. 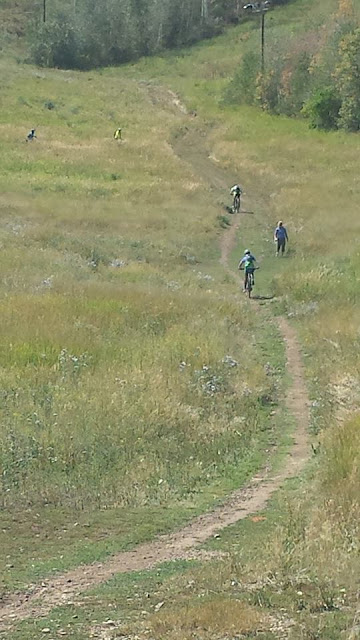 At this point I was over 6 hours into the race and all the power was zapped from my legs.  I felt like I was crawling up Armstrong trail and rocky sections I usually glide over stopped me.  When the trail turned down, I let off the brakes and let my Pivot Mach4 roll. The last hour or so of the race I battled the climbs and then descended the rocky Canyons Resort trails as fast as my tired body would allow.  I arrived to the finish at the Canyons in 8:47; a little slower than my goal time of 8:30, but respectable and good enough for 8th place overall in a stacked women's field.  It only took me about 5 minutes after I finished to decide I would be back to try and better my performance. 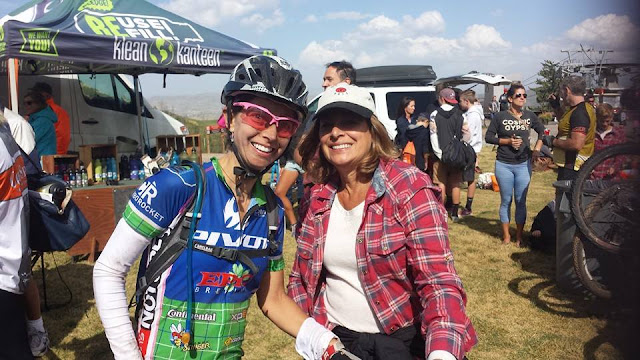 It was great being greeted by my Mom at the finish!

I have done quite a few 50-milers since my cancer diagnosis, but the P2P was the first time I have wet my toes in ultra endurance racing since 2010.  Although I was a few minutes shy of my goal time, what I am most excited about is my recovery after the race.  Recovery has been one of my biggest challenges since cancer treatment, and I feel that my post P2P recovery has been right on track.  With the 2016 race season around the corner, I am excited to wet my entire feet in some ultras!
Posted by Jen Hanks at 9/13/2015 3 comments: