January 25th, 2011, two years ago today, is a day that I will remember forever.  It was the day I received the news I had breast cancer.  Each year as January rolls around it is difficult for me and Shannon not to think back on 2011 and remember the tests, the fear and anxiety waiting for results, and then the news that I indeed had breast cancer.  But we don't.  Instead we focus our thoughts on our new annual tradition of a January vacation.  Last year it was Kauai, Hawaii.  This year Tulum, Mexico.  Holy cow, I love January now!

Shannon and I can pretty much go anywhere and as long as we're doing our thing (biking, hiking, exploring...) we have a great time.  But Tulum was AMAZING.  It was the perfect combination of beautiful beaches, cultural experience, and lots of physical activity.  Here are a few (and by few I mean a ton) of photos from our trip. 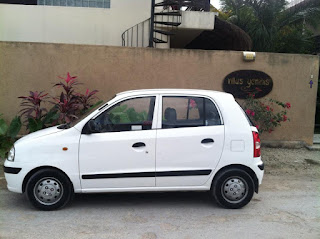 We flew into Cancun and rented a car go-cart.  Renting a car for the week was cheaper than paying for transfers to/from the airport and taking a bus on all of our out-of-Tulum explorations.  Driving in Mexico was an experience in and of itself.  I'm pretty much convinced that 1-there is no speed limit 2-there are no rules to the road and 3-if there are no one follows them despite the policia being everywhere.

Speaking of policia, they were everywhere.  Conducting random car checks on the interstate, armed at the grocery store, standing in the back of a pick-up driving along the beach with their AR ready.  I'm not sure that their presence made me feel safe, but overall Tulum seemed to be a safe place.

We stayed in a little condo in the Town of Tulum a few miles from the beach.  It was small, clean, close to the Mercado, and surprisingly inexpensive.  We rented commuter bikes for getting around town. 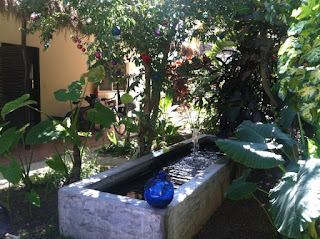 The outside of our condo.  You can see our commuters behind the tree. 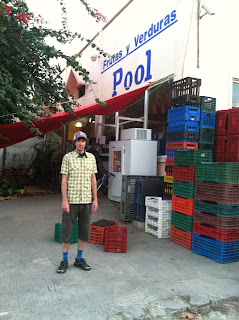 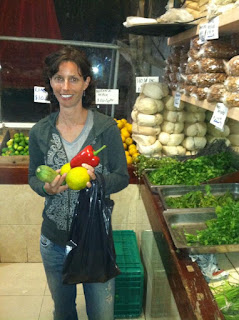 Fresh veggies for dinner were less than $3 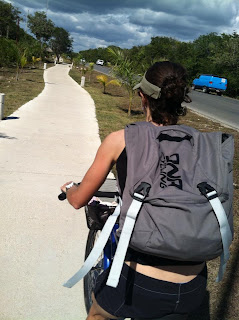 We rode our bikes to the beach every day 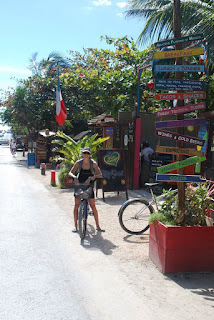 Tulum is very bike friendly.  The strip was lined with bike racks. 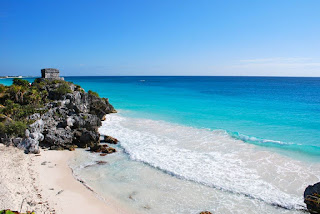 The beach was amazing 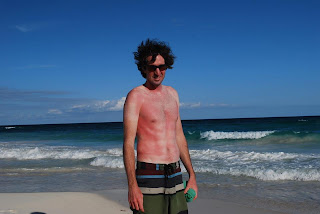 and despite an abundance of sunscreen, Shannon got sunburned 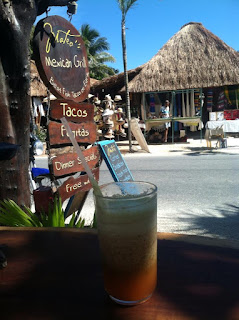 We got lots of fresh juice 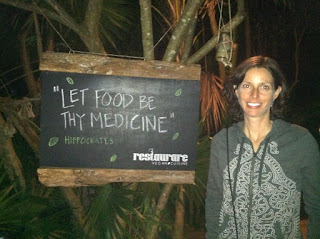 and had an amazing dinner at Restaurare.
I ordered the Mayan Curry and a cucumber, basil, pineapple, chia juice. 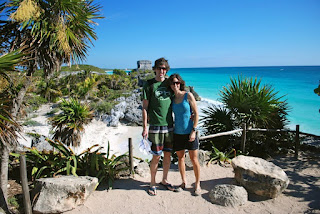 The Tulum ruins are the only ruins on the coast. 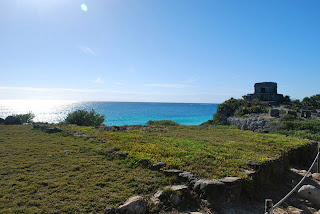 Despite the breathtaking views, none of the structures had windows overlooking the ocean. 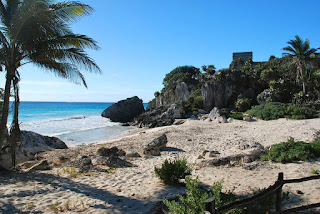 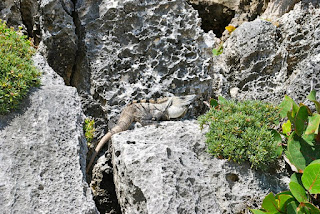 and made friends with a rather large iguana 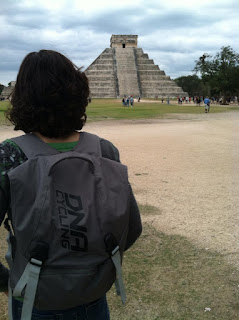 Chichen Itza is world famous and beautifully restored.
It is worth the two-hour drive from Tulum. 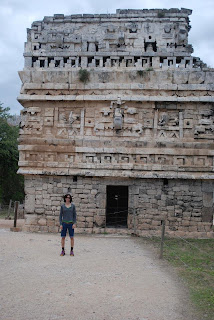 Even though the Mayans were short, their buildings/temples were tall 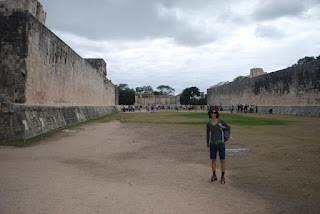 They would play ball in this ball court.
Apparently, although it is not clear to me how, death was involved. 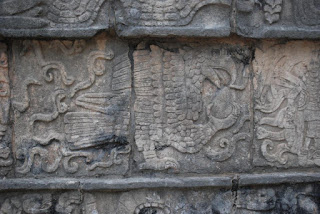 The carvings at Chichen Itza are detailed and beautiful 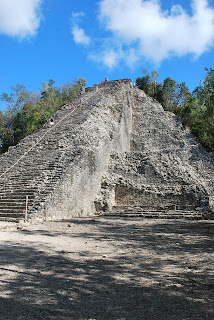 Coba ruins are dispersed over 70km in the jungle just west of Tulum.
They are home to the tallest Mayan pyramid, Nohoch Mul (Big Mound).
It is 101 steps to get up Nohoch Mul (versus 91 at Chichen Itza).
The Coba ruins are unique in that they are open for climbing/exploration. 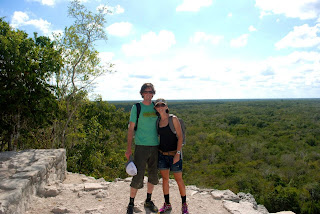 Overlooking the jungle at the top of Nohoch Mul. 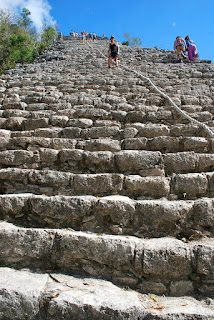 The hike up was steep, the hike down was downright frightening! 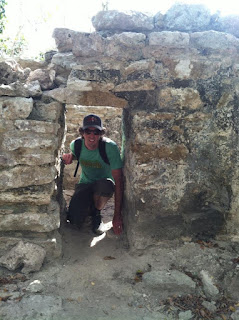 Not sure if this was an entry to a children's playhouse or if the Mayans were really this short. 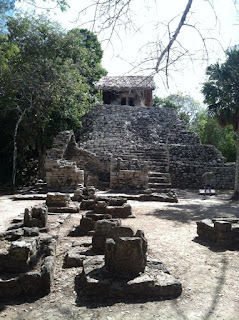 The Coba ruins are not as well restored as Tulum and Chichen Itza.
The front of this structure has been restored. 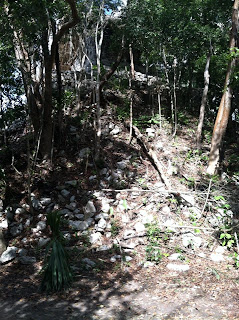 This is what the unrestored back of the same structure looks like.
The jungle is growing out of it! 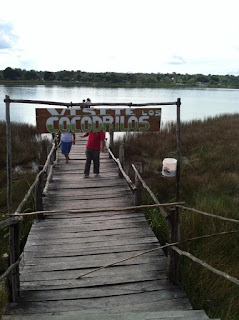 In the town of Coba there was a pier where you could pay to feed the crocs.  We passed.

We also snorkled at some cenotes.  Tulum is famous for its natural water caves. 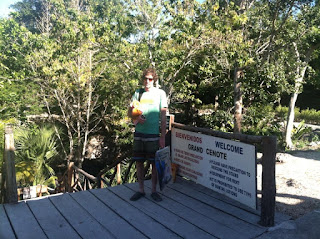 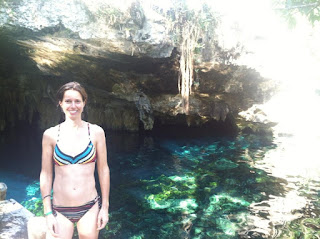 You climb down to the cenote.  The water is crystal clear but chilly. 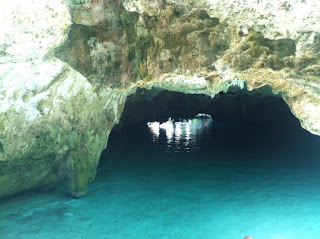 You can snorkel through this cave to another pond.
Hundreds of bats hung from the roof of this cave.  I kept my head in the water. 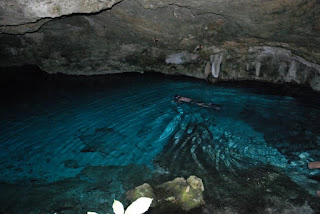 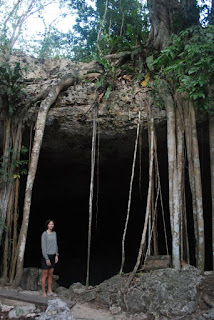 Despite being 80+ degrees outside, the cenotes were chilly.

So, on my two year cancerversary instead of thinking about how two years ago this day changed my life forever, I am basking in the glory of just returning from a fabulous vacation.