Yesterday I raced my cross bike-singlespeed.  It was the annual Cross out Cancer race/fundraiser and I wanted to support the event.  I usually (as in pre-cancer) race with the A women, but I decided to race singlespeed for two reasons:

1.  I didn't want to take the race too seriously and I knew that if I raced A I it would be impossible for me not to.
2.  The A women are fast.  They scare me right now:)
I definitely succeeded in not taking the race too seriously.  I missed the start.  I have never done that before and it is kind of embarrassing. I take full responsibility, but here is how it went down.  Three categories were to go off with 1-minute staggered starts.  The order was posted to be Men B at 11:15, Singlespeed Men at 11:16, and Singlespeed women at 11:17.  I figured there was a possibility that the Singlespeed men and women would go off together because the women's category is so small, so I was socializing not far from the start line at the Revolution tent, keeping an eye on the start, and waiting for the Men B to take off before I rode over.  Next thing I know the Singlespeeders were off and the other lone woman was with them.  Duh!  Apparently Bob (my friend) talked the official into starting the singlespeeders before the Men B category to help with course congestion.   Thanks Bob:) I rode over to the start and it took a minute before I figured out exactly what happened....and then I was off, with 50 Men Bs not far behind.  I felt kind of stupid riding alone, but was giggling to myself, and enjoying the new excitement I created for the race.  It wasn't long before I realized I had made stupid mistake #2 when I hit the first rough singletrack section.  Since I hadn't done a hot lap on the course, I didn't realize that I had way too little air in my rear tire.  I was bottoming out on everything and was relieved that I made it safely to the Revolution tent for some air at the end of the lap.  (Thanks Theresa for holding my bike while I put more air in my rear tire).  The rest of the race went much better and I was able to catch the other woman and take the win.  More importantly, I felt really good and had a blast. 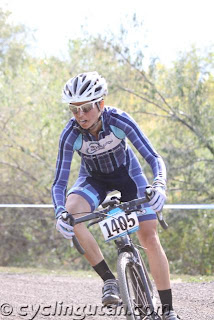 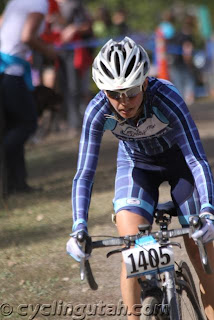 (Those are dollar bills in my shorts.  Thank you random spectators for the hand-ups:)  I will be donating them to Cross Out Cancer.  Wouldn't it be cool if everyone, for the rest of the series, donated their cash hand-ups to Cross out Cancer? 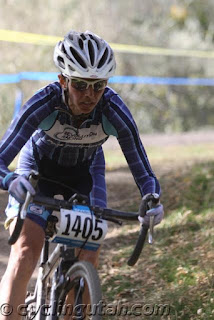 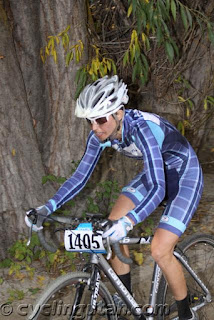 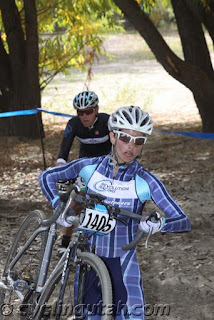 (Photo credit: Cycling Utah)
Today, I definitely paid for yesterday's gear mashing effort.  My whole body is tired, but that didn't stop me from riding the Crest trail with friends for what may be the last big mountain ride before the snow flies.  I brought Flat Stanley along for the ride.  I'm not sure exactly what Flat Stanley is, but my niece asked me to take him cool places and take photos.  Today he posed for pictures at the top of Puke Hill. 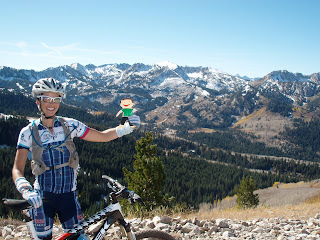 This weekend is the 2nd annual Utah Cyclocross-Cross Out Cancer event.  The Utah Cyclocross series (UTCX) is a 12 race series that is hugely popular in Northern Utah.  Last year, the promoters decided to dedicate one of the races as a fundraiser for Livestrong Foundation.  It was incredibly successful and they have committed to the Cross Out Cancer event again this year in hopes to raise money for Huntsman Cancer Foundation in addition to Livestrong.


The day is packed full of fun with something for everyone.  There is a 5k trail run in the morning and a fun ride later in the day.  Between these two charity events will be cyclocross racing.  In cyclocross racing, racers ride basically a road bike with a little beefier tire.  They race around a relatively short circuit and have to get off their bike and run over barriers. 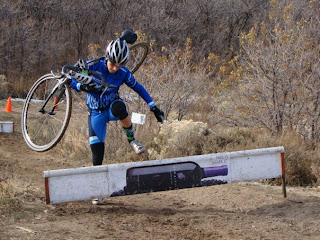 It is incredibly spectator friendly and rowdy spectators and heckling of the racers is actually encouraged!  The beefier tire is necessary because racing is mostly on dirt in the Fall when it is typically cold, rainy, or snowy. 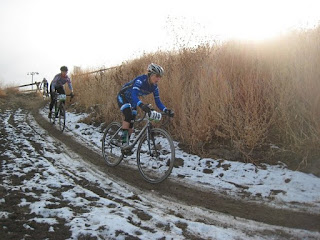 This weekend is looking to be beautiful though.  There will also be a silent auction all day long where you can bid on fantastic schwag.  Proceeds go to Huntsman Cancer Foundation and Livestrong Foundation.


If you cant make the event, you can still participate by donating!  I have set up a page for donations.  Of course, every small amount is truly appreciated.  I recently saw a statistic where it was projected that a total of 1,596,670 new cancer cases and 571,950 deaths from cancer will occur in the United States in 2011 alone! (CA: A Cancer Journal for Clinicians Volume 61, Issue 4, pages 212–236, July/August 2011)  Clearly cancer affects many and continued research is imperative.


If you would like to donate, click here.  Donations can be made through the middle of December.  100% of the donations will go directly to research.
Posted by Jen Hanks at 10/19/2011 10 comments:

There is pink everywhere

It is hard to go anywhere this month without noticing the pink.  I don't know when pink started to symbolize breast cancer or when breast cancer started having its very own month, but I notice now.  Although pink is not my absolute favorite color, never has been, I truly appreciate the recognition the color brings to a disease that affects 1 in 8 women.

Early detection directly correlates with survival, so in honor of breast cancer awareness month, I ask that everyone do a self breast exam.

Although self breast exams are controversial because research does not show an increase in survival by women who routinely do breast self-exams, I stand here to say, the cancer I had would have been discovered at a much later stage had I not done a self breast exam.  Staging does affect survival, and although I realize there are no guarantees, I feel very fortunate that I found this lump at a fairly early stage and followed up on it. Otherwise, it likely would not have been discovered until I started doing routine mammograms at age 40.  Even then, it may not have shown up on mammogram.

As I've mentioned before, mammograms are not always effective for young women.  Young women tend to have dense breast tissue that shows up as white on a mammogram.  Cancer also shows up as white.  My entire mammogram was white because of my dense breast tissue so any cancer that was there could not be seen.  The density of my breast tissue may or may not have changed in the next 5 years and this is one of the reasons that mammograms are not recommended routinely until age 40 (or 50 depending on the source).  Regardless, in 5-years time my cancer would have most likely been more progressed.

Okay, I digressed, but hopefully emphasized my point, just do a self breast exam........

and on a lighter note, my hair is growing in really thick.  I have always had incredibly think hair; too thick in my opinion, and it looks like post-chemo that has not changed.  So far it is a bit darker than it was before, but perhaps that is because it hasn't had a chance to get bleached by the sun.  I'm not one to take lots of photos of myself, but when they include Dizzy I'm game.  We took these this morning. 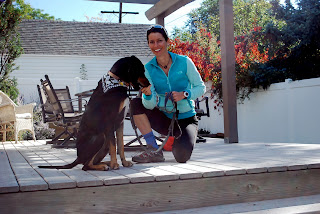 Dizzy on the deck looking for treats in my hand 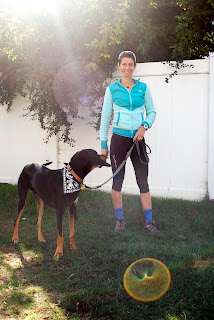 Dizzy in the backyard looking for treats in my hand 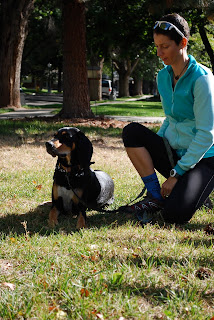 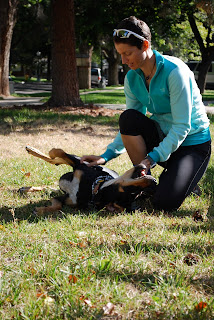 Dizzy being cute hoping to get more treats 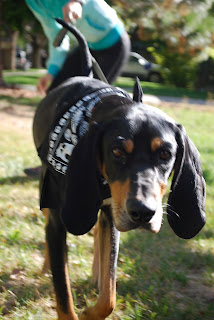 Dizzy showing that he is done taking photos
As you can see in the photos, it is a beautiful October day in Utah.  We're off to ride mountain bikes.  I hope everyone is enjoying the great weekend.  After a self breast exam.
Posted by Jen Hanks at 10/15/2011 3 comments:

Last week I had the opportunity to participate in a really, really cool thing.

The Utah State Championship Series (USCS) is a new 4-race mountain bike series in Utah.  The promoters, whom I know well, are all really great guys and decided long before the first race of the series that they wanted to give back to the community. So it was decided that $5 from each entry fee along with money made from an opportunity raffle and Silver Bean coffee sales would be donated to Huntsman Cancer Foundation.  Coincidentally my husband is one of the aforementioned 'great guys' and even more coincidentally it was decided that the money be donated to Huntsman Cancer Foundation before I was diagnosed with breast cancer.

So, for the first time ever, I stepped into Huntsman Cancer Institute not as a patient, but as part of a really great group of people donating $5000 to cancer research.  There was a giant check and everything. 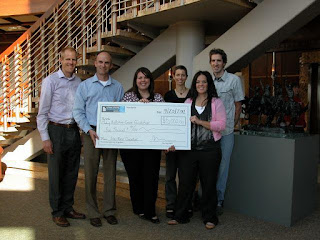 (Note:  I have more hair than 33% of the people in this photo:)
Even cooler was how genuinely excited the Huntsman Cancer Foundation event planners were about the $5000 donation.  $5000 is a lot of money, but compared to the millions that Huntsman donates, it is pocket change.  Regardless, the sincere appreciation made it seem like a million was donated.   We were also reassured that 100% of the $5000 would be used for cancer research.

I hope that the USCS continues to grow and is able to increase the donation next year.  This year a brick on the 'path of hope' will mark the USCS donation.  Maybe in a few years it will be a hospital wing.  Better yet, bikes for the fitness center.
Posted by Jen Hanks at 10/11/2011 1 comment:

6 Hours of Frog Hollow was my first 'official' mountain bike race since being diagnosed with breast cancer in January.  Although to many it may be just another race, to me it was much more.  This race marked the end of my breast cancer treatment and the beginning of many epic things to come.

The weekend was full of anticipation, excitement, an epic course, great friends, a silly puppy, joy, giddiness, and much more.......

In summary of the weekend:

Shannon and my good friend Bob were the fastest team of the day.

I still have not figured out an easy vegan appropriate recovery drink.

Dizzy is going to be a great race puppy.  He hung out at the tent all day and was as excited about rolling in the dirt as I was about racing my bike.

Cancer has changed me.  It has taken things away from me.  It has not taken away my ability to race my bike! 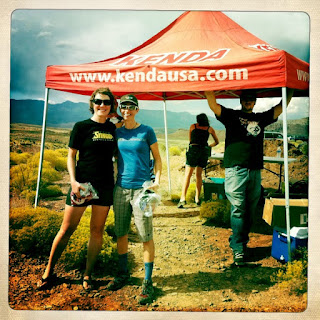